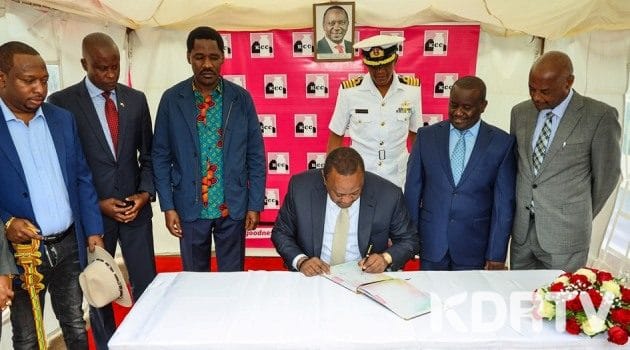 ”Let us consider rearing grade cows that will help us boost the milk production that will enough for us and even get to where we can export to neighbouring countries as well as the Gulf states and Arabia,” said Kenyatta.

“There is now the third factory we are revamping after Eldoret, Sotik and we have now expanded this new plant in Dandora, which later we will revamp Nyahururu and the one in Kiganjo,” he adds.

He also warned the new management of Kenya’s second-biggest milk processor against financial crisis like their predecessors had done.

“I want our directors to know that last time it was your predecessors who collapsed this factory, please ensure that the money that we have invested in this process benefits farmers and Kenyans at large. Be loyal to these farmers who have trusted you with those positions,” Kenyatta also said.

In March, the Ethics and Anti-Corruption Commission received complaints about KCC boss Nixon Sigey and had instituted an investigation.

He was accused of using Sh2.6 million to hire a helicopter to ferry Deputy President William Ruto and Trade Cabinet Secretary Adan Mohamed to Nyahururu, Kiganjo, and Eldoret in August last year.

In May New Kenya Cooperative Creameries Matu Wamae exited the company after serving for 15 years to pave way for the new management.