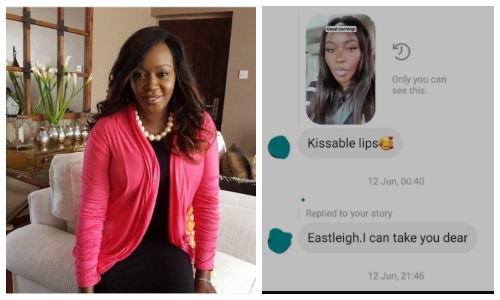 Kenyans have called out media personality Terrayanne Chebet for rejecting a desperate job seeker who had initially tried to make advances on her on social media.

The business news reporter took to social media to share screenshots of a man who begged him for a job in his company saying that she wouldn’t give him a job because he had “shot his shot”, which, she considers unethical.

The man had been texting Chebet way before he decided to ask for the job.

“I am all about shooting your shot, but not when you’re actively job hunting, “she said on Twitter.

“Got an inbox, good candidate, mailed him to book an interview, only to scroll up on IG to see messages he had been sending me, which I hadn’t seen. The End. Like, the end.”

Chebet further said she couldn’t work with an intern who claims to like her.

Would you work with an intern who's told you she has a crush on you?

The post attracted mixed reactions from Kenyans who advised her not to focus on petty things and give the job since youth are suffering.

Pasha Afy: Gosh… What does that have to do with the job interview… Smh

Patrick Macharia: Madam…hapo you failed because you became personal….that was his emotions towards you…..

You have worked for men you have slept with, why is this an unforgivable mistake?

Being poor is a punishable offence in this country.

So, I always message ABSOLUTELY RANDOM WOMEN on Facebook with "Hey, bebi." Does that mean I may miss some opportunities in the future? Note: they also ignore me, especially because my next line is "Can I see your bobs?" https://t.co/yt7GznIcwA

Simon Mbugua Just give him job, what’s wrong with being romantically sincere? as long as he didn’t chungulia your kamisi I don’t see anything wrong

Mike Nyingi Is she afraid that she will say yes to his advances?! She could just tell him to choose from the two options, job ama advances. I mean what’s so difficult in saying NO to advances….. Hii overreacting just because you can is just superiority/inferiority complex