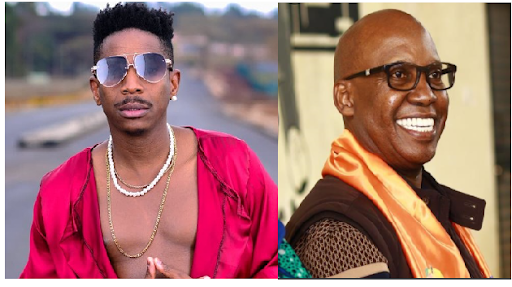 Speaking in SDE, the comedian said that he landed the deal only after meeting the billionaire at his home earlier today and it’s not something that was planned.

“We have agreed that in the coming months, I will be communicating Wanjigi’s vision for Kenyans,” he said.

A few days ago, Omondi was trolled for releasing the “Fagia Wote” campaign on social media urging young guys to vote out any politician that has held a seat for too long and bring in new faces such as Jimmy Wanjigi.

READ ALSO: Every Time I Speak, EACC Raids Me- Waiguru Believes Someone Is Behind Her Woes, ‘Unlikely’ To Join Ruto

Kenyans insisted that he only endorsed the wealthy business because of his deep pockets.

Omondi however said that the two have never even met prior to that.

“This was our very first physical meeting and he has shared with me his manifesto and development agenda for Kenya. Now I’m his official spokesperson who’ll break down and convey his agenda to Kenyans,” the comedian revealed.

“I think the youth are suffering and yearning for a leader with their solutions. I will not be Wanjigi’s running mate but I will support his course and vision as he explained. However, in future, don’t write me off for the ballot. Considering that I’m the President of comedy in Africa I may as well make my political dream a reality.”

Regarding the trolls, Omondi said that he really doesn’t care what Kenyans say because people online always criticize.

“Kenyans of a different opinion than yours will always feel entitled to bash you. It is everyone’s right to support their candidate and I’m no different. That’s why I have pledged my support to his ideology having seen his track record as the leading businessman in the county.”