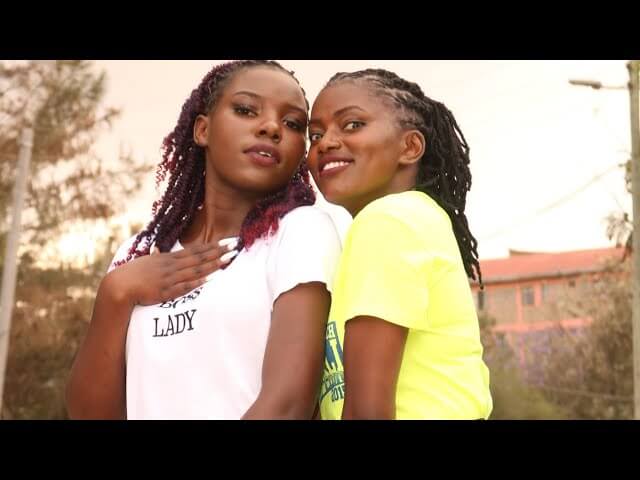 (KDRTV) – Fast-rising social media comedian Cartoon has revealed she records all her hilarious clips on her friend’s smartphone.

In an interview with Jalango, Cartoon who has become a household name in Kenya with viral phrases like ‘inani affect!!, inani choke!!,‘ said she doesn’t have a good smartphone to record the videos and relies on her bestie.

“I have a friend called Diana, she has been the one shooting all the viral videos on her phone. We don’t have a camera,” Cartoon, whose real name is Vanessa Akinyi said.

Born and raised in Kayole slums, it was not easy getting to the top for Cartoon. She is the lastborn and only girl in a family of three.

Cartoon says they were raised by a single mum who struggled to raise her school fees.

She studied at a day school in Kariobangi, where she was forced to stay out of school for several months over a lack of school fees. As a ghetto girl, she learnt very early to hustle.

“I used to sell omena, and it has some good money,” she said.

Cartoon never gave up on her comedy dream, she went for auditions on Churchill Show. It took at least one year for her to get her first show.

“I used to go for auditions every Tuesday despite being told that I wasn’t ready. I got my first show one year later at the Allianz Francaise,” Cartoon said.

Even then, things didn’t go well for her as the first show received hate comments.

Things started working out for her soon as she got several shows. But COVID-19 happened, bringing the whole world to a standstill.

She hooked up with Sammy Kioko, another upcoming comedian for a short comedy series titled ‘Sweet Moyo’ which aired on Youtube.

Cartoon soon found herself with nothing to do after the show ended. This is when she decided to do short clips for fun and could have been the best decision she ever made.


Videos like Too Much English and Inani affect, where she dances to a Gengetone hit have put her on the national limelight.

She is one of the hottest property in the entertainment industry at the moment. It can only get better in the coming days.

To all upcoming female comedians, Cartoon wants them to never stop dreaming.