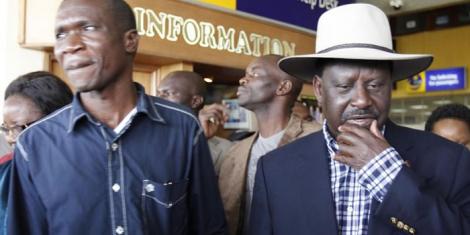 Azimio la Umoja flag bearer Raila Odinga is renowned for his organized and skillfully produced public communication Thanks to his spokesman.

Many people mistaken him for Raila’s bodyguard, a tall man who constantly follows Raila. Dennis Onyango, a journalist by profession , is responsible for preserving Raila’s reputation in the media.

He was appointed as Raila’s personal assistant in 2008, after the ODM leader was named prime minister following the contentious 2007 general election.

Onyango has utilized his media abilities for some time to ensure that Raila is not depicted in a negative way, coordinating all press conferences and other media engagements.

According to reports, he is a prominent player in Raila’s media life, where he decides who can have encounters with the African Union (AU) ambassador.

In June 2020, he unleashed a diatribe against Deputy President William Ruto and the whole Kenya Kwanza alliance, ridiculing Ruto’s demonization of Raila as a political ploy. Onyango stated that the strategy would not prevent Raila from running for governor in 2022.

” Deputy President, you are going down. You are not the first to walk that path. There is room to go down with dignity and return to glory later.

Onyango has consistently polished his journalistic talents despite directing Raila’s media department. He is a contributing author for one of Nation Media Group’s (NMG) news outlets, Nation Africa, with 907 articles thus far.

Majority have also confused Onyango’s role with that of Professor Makau Mutua. While revealing his campaign strategy, Raila selected Mutua his Spokesperson of the 2022 presidential campaign secretariat as well as head of its think tank.

Onsarigo manages all media relations needs and involvement of his 2022 campaign secretariat.