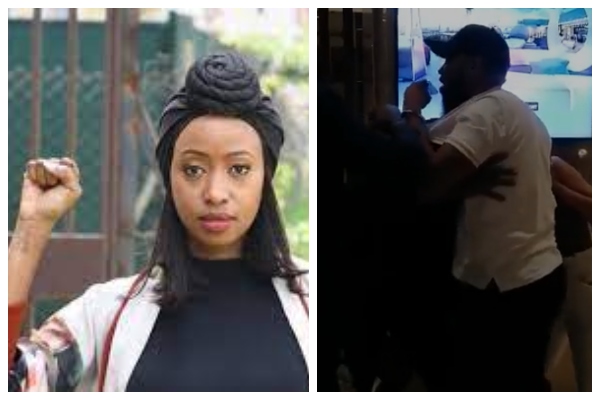 Taking to social media, the Inua Dada champion who has been tirelessly campaigning against Gender Base Violence said that she was saddened by the happening and hopes the law will take shape.

“I am saddened by increasing incidents of Gender-Based Violence. Over the last decade, I have joined my voice to efforts to #EndGBV. I condemn all forms of GBV irrespective of who is involved and will continue to speak out against it. We have laws in Kenya and justice must prevail,” she said on her social media pages.

The post comes after a public outcry demanding the arrest of the twins after they allegedly attacked two women who rejected their advances.

According to the women involved in the fight, the two brothers attacked them after they rejected their advances.

“Yesterday my sister and I were attacked by the Ndichu twins for respectfully turning them down. They threatened to shoot us and ruin our lives,” the woman said.

“My sister was strangled by Paul Ndichu while her boyfriend who had come to her rescue was being strangled by Eddie,” she went on.

The two women said that they are scared for their lives following the stint.

“We dont feel safe to even go to a restaurant. Had my sister been alone only God knows what the two brothers would have done to her,” she confessed.

“To think its only been less than a week since Tirop was brutally murdered by her husband. We need to stop Gender-based violence and violence against women,” she added.