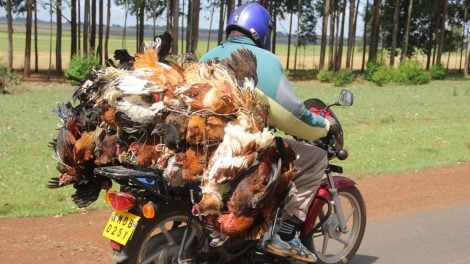 One person has died while eight others were rushed to hospital after consuming meat from a sick chicken in Igumo village in Marimanti ward,  Tharaka Nithi County.

The deceased, a 7-year-old girl, died after being given the meat by his grandfather on Monday.

Seven other children and an adult who also consumed the meat were rushed to Marimanti Level 4 hospital after developing stomach complications.

READ ALSO: Kenyans In Diaspora: Kenyan Pastor Arrested In UK After Claiming He Can Cure Covid-19

After the situation deteriorated, it was discovered that a total of eight children had consumed the same meal from their grandfather, identified as Karong’o Makembo.

According to Fridah Nyambura, one of the grandchildren admitted at the hospital, said that her grandfather brought her the meat at her workplace but was unable to finish it because of the odor.

She said that moments later after eating, foam started oozing out of her mouth and she experienced stomach discomforts, dizziness, and straining eyesight.

One of Karongo’s sons said eating a sick chick has happened several times in the past but they have never experienced such an occurrence.

Dr. Mwangangi, a medical officer at Marimanti level 4 hospital, confirmed the incident, which he attributed to food poisoning. He said that the vomit from the victims had a chemical odor.

Those admitted to the hospital are in stable condition.