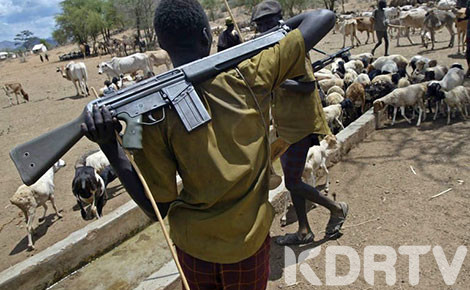 The attackers killed five men and injured three others when raiding about 500 cattle in the Manyatta Qoroso area of Marsabit County, which borders Ethiopia, on Saturday evening.

“Five male Gabra adults were killed and three others were seriously injured” in one small village, the police said in a statement.

READ ALSO: I won’t Beg Raila To Support Me In 2022, Says Kalonzo

A day later, the raiders attacked the nearby village of Kubi Ires Burale Fora, Gabra adults and three children between the ages of 13 and 15, including one girl, were killed, with four people injured.

the raiders also managed to steal 1,000 goats from the village in the second attack but had one of their raiders killed in the attack.

Kenyan authorities were on the hunt for the attackers by ground and air, according to the statement.

The theft of livestock  and deadly attacks to carry out the crime are common between cattle herding communities in northern Kenya, cross-border attacks are rare.