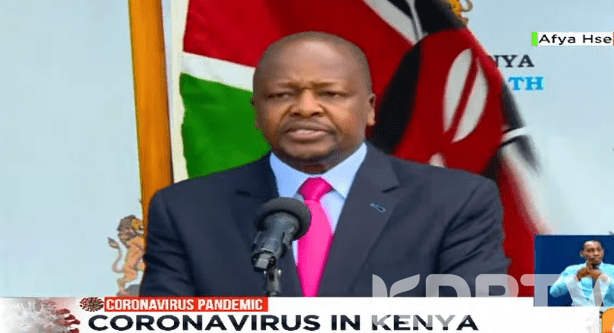 More than 3.5 million Kenyans are at risk of contacting the deadly Covid 19 if they will fail to adhere to regulations being issued by the Government.

This is after Health CS Mutahi Kagwi revealed that almost every estate within Nairobi had recorded a positive case.

Speaking during a daily press briefing, Mr Kagwe said that several estates in Nairobi had recorded a positive case.

Other estates that have recorded positive estates include; Tassia 1, Parklands 1, Madaraka 1 and Ngara 2.

A total of 16 people on Saturday tested positive for the Coronavirus which raised the total number of infections to 262.

This the CS said while issuing a report to the Senate Ad Hoc Committee during a zoom meeting and later during the daily briefing of the day.

Out of the 16 new cases, 15 were Kenyans and one is a foreign national and they all have no history of travelling and were not from any of the quarantine facilities that have been set aside by the government.

The new cases were confirmed after the testing of 1, 115 samples in the last 24 hours as the capacity had been doubled.

Two weeks ago the government set aside boundaries within the borders of Nairobi and locked-down the exit points.

This means that people who are within the city center cannot leave Nairobi to other areas.