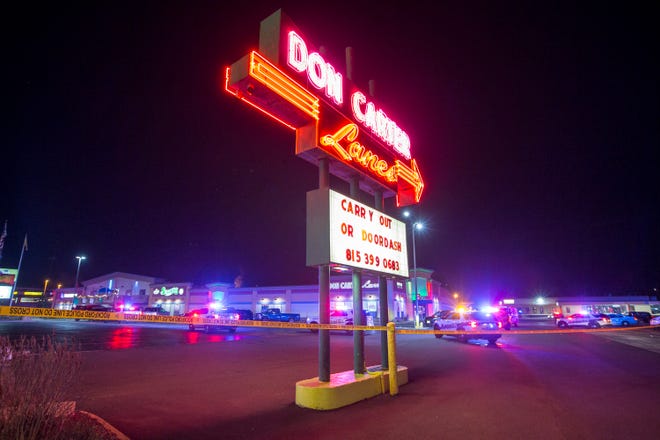 (KDRTV)-An active-duty military personal Duke Webb opened fire randomly at a bowling alley at around 7 pm on Saturday, killing 3 people and injuring 2 teenagers and an elderly.

The incident happened in Rockford city Illinois on Saturday evening without any justifiable reason, Duke Webb an actively serving military solider had no connections to any of the people present in the Don Carter compound that day, he used two handguns to fatally shot 3 men aged 69, 73, and 65 and critically hit a 14-year-old boy in the face, a 16-year-old female teenager and a 62-year-old man who remains in critical condition after multiple surgeries.

The police apprehended the individual in question on the spot without resistance or using violence, Duke attempted to hide the handguns and conceal his face, quietly leaving the area but police were quickly on him. The entire shooting was captured on surveillance camera and was handed over to investigators.

Please continue to stay away from Don Carter’s area on East State Street. It’s still an active situation and officers are continuing to clear the area.

Rockford city is 150 miles from Chicago and has experienced its deadliest most violent year since 1965 with 35 homicides 21% increase in violent crimes. The city mayor, Mayor Tom McNamara,  let out a statement that he was angered and terribly saddened by the random act of violence, blaming it on a possible mental disorder with the military person and wished a speedy recovery to all the injured victims.

The police are investigating the suspect for a history of mental disorders and PTSD syndrome.