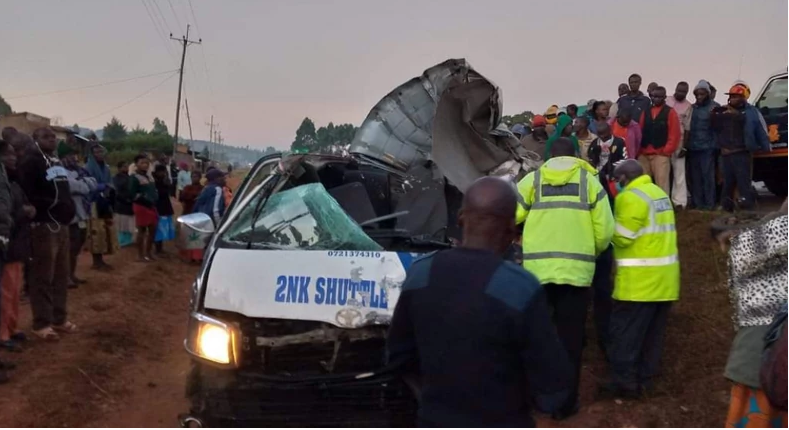 KDRTV NEWS: Eight people have perished after a matatu rammed in a stationery lorry along Eldoret-Webuye high at Sunday`s dawn.

Reports indicate that there were no survivors of the accident that occurred in the Musembe area.

“It is like the driver panicked on abruptly seeing a stationary lorry and tried to swerve but the lorry ripped off the roof and the metals beheaded all the occupants,” Kimani said.

The said matatu that as traveling from Webuye is said to have had eight occupants at the time of the accident.

The bodies were taken to Webuye sub-county hospital pending postmortem

Matatu rammed in a lory

According to Nicholas Mwangi, a truck driver, he had stopped by the road to assist a trailer driver he had known when the matatu driver rammed into his trailer from behind.

“I saw a truck ahead whose driver I know that had stalled on the road so I slowed down and stopped behind him. But moments after I had alighted I heard a bang and saw the matatu ripped off the roof,” Mwangi said.

Police at the scene of the accident