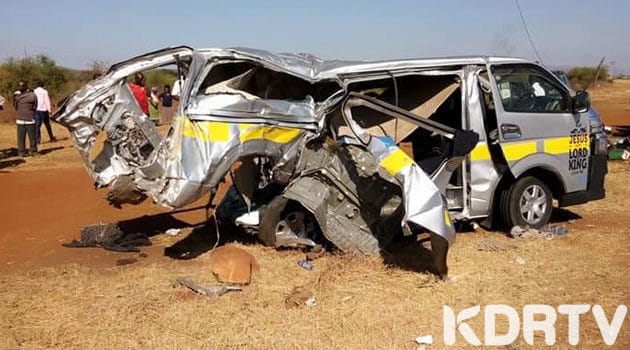 Eight people have been confirmed dead on Friday night after getting involved in a road accident that involved a motorbike, matatu and a trailer along Eldoret-Webuye highway.

The scene is reported situated at Lwandeti area, where other several passengers were left with serious injuries.

According to a statement issued by police, the accident occurred after the motorist lost control and rammed into the on-coming matatu resulting in a collision with a truck. Seven passengers perished on the spot while one reportedly died later.

Today, 4 people were killed and more than 10 others injured in multiple road accidents on the Nairobi-Mombasa Highway.

The first accident involved a saloon car and an on-coming caravan where three occupants of the saloon car all perished.

“Three people in the saloon car died instantly, three other passengers in the caravan who had sustained serious injuries were rushed to Machakos Level Five hospital and the other 10 passengers with minor injuries were taken to Shalom community hospital in Athi River,” said Machakos County emergency services director David Mwongela while speaking to Citizen Digital

The second accident involved a police vehicle ferrying inmates to Makueni Prison which overturned at Kiunduani area on the Nairobi-Mombasa Highway, which to death of one person.

The cause of this accident is yet to be determined.