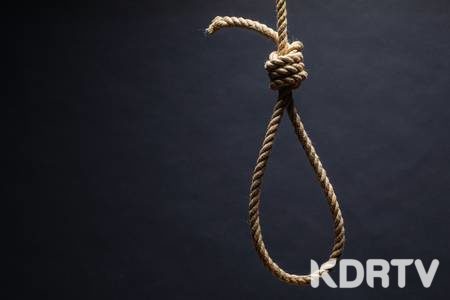 106798114 noose the concept of murder or suicide on dark background

An elderly 65 year old man has committed suicide in Laikipia Sub-County after being diagnosed with cancer.

Although the type of cancer has not been established and its stage, the old man decided to  hang himself a few hours after screening was done.

According to Laikipia Sub-County Police boss, the deceased left a suicide note explaining the reason for his decision to take away his own life.

The Police boss Maxwell Nyaema explained that the suicide was reported by the niece to the disease, who found him hanging on a pole from the roof top.

“The note was located a few meters form the shopping center and it was a letter to the wife Teresia Nyokabi explaining the reason for his death and taking the blame for it,” Said Nyaema.

The police officers after the report proceeded and found the body hanging from the roof, unconscious and proceeded to take it to the Nanyuki referral mortuary where a postmortem will be conducted to rule out other suspicions.

According to the deceased family, the reason for the suicide might be associated to the stigma and financial drainage that comes with it.

Treatment of cancer is very expensive especially to the middle aged people in the society who only afford provisions of mouth to mouth.

One of his close neighbors also alluded the cause of the suicide to his elderly age as he was not in a position to take any bad news, leave alone the shock of suffering from cancer.

This case comes after a woman committed suicide in the same exact manner after being diagnosed with breast cancer in Naivasha.

Cancer is now a menace in the country that has taken over the lives of  many, both prominent and poor.

The government should take various procedures to curb the menace before it spreads widely and sweeps across the country.

Ideally, hospitals and cancer screening centers should be equipped with professionals that handle and deliver the news in a positive way.

The news of the disease distorts the mental health of a person hence should be delivered and the patient counselled.

As much as cancer is a killer disease, it is treatable if discovered at an early stage and curbed.

Therefore, cancer should not be treated like a death sentence but rather as any other disease that can be managed.