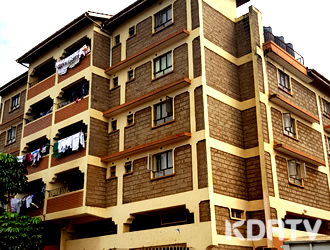 A family in Umoja Estate, Nairobi County is mourning the death of their one  year old son who fell off the balcony and died.

The boy was playing and jumping around before he met his untimely death.

It is believed that he climbed on a chair that had been left by the neighbor before he tumbled over and fell.

The family to the boy resided at an apartment in the estate, occupying a house at the fourth floor, hence limited chance for survival after the fall.

He was immediately rushed to the nearby hospital and pronounced dead on arrival.

The father was left very devastated and is currently still in shock, narrating that he had left him in the morning very jovial and happy.

Oliwa Tobias narrated that he had just come home from work when his older son rushed to him reporting that an accident had occurred and that he had to rush to the hospital.

He wasted no time and rushed there, mind still in confusion.

On arrival, he received the devastating news that his son had already passed on and there had been limited chances of survival since he had lost a lot of blood and acquired serious injuries and fractures.

The mother to the boy fainted and became  unconscious after the doctor declared the boy dead, and although she regained consciousness, she is still in a somber mood and shocked.

The police were alerted of the incident and confirmed the happenings before transporting the body to the city mortuary.

The police urged parents with young children to be vigilant and keen especially those living in top floors of buildings.