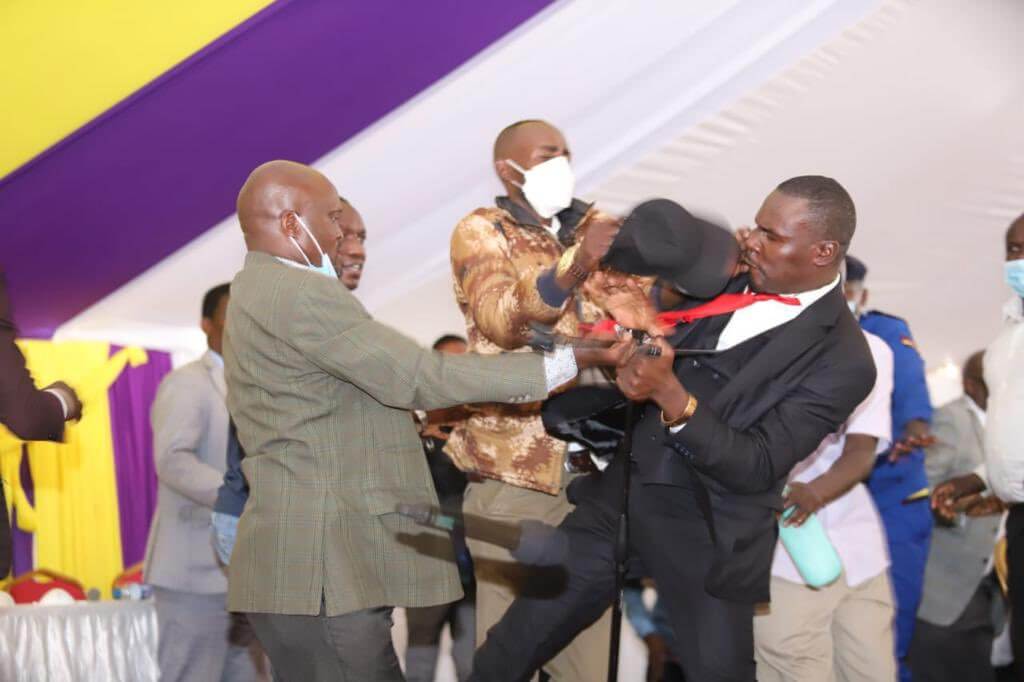 (KDRTV) – Dagoretti North MP Simba Arati was, on Monday, forced to cut short his speech at a funeral in Kisii after being heckled by Deputy President William Ruto supporters.

Standoff at a funeral in Kisii being attended by DP Ruto & ODM leader Raila as MPs Simba Arati and Sylvanus Osoro clash pic.twitter.com/35NUt6y5G6

The Lawmaker, while addressing mourners at the funeral of Kisii Deputy Governor Joash Maangi’s father in Bomachoge, said things that were deemed as insulting to the DP.

He said the DP should apologize over the 2007/8 Post Election Violence. A substantial number of members of the Gusii community were killed in Naivasha and Nakuru over the violence.

He also warned that it is time for other communities to clinch the Presidency because Kikuyus and Kalenjins have ruled the country for far too long.

However, his speech was cut shot with the crowd chanting ‘Ruto! Ruto! Ruto!’

South Mugirango MP Sylvanus Osoro, a fierce Ruto supporter, rushed to the podium with an intention of snatching the microphone from Arati, leading to a fist-fight.

The ceremony was halted for a while as Kisii Governor James Ongwae attempted to bring the event to order.

Ruto and ODM leader Raila Odinga are also at the funeral.

Arati is a member of the Gusii community which has a substantial support for the DP.

Maangi, is a key supporter of the DP and a Tanga Tanga point man in Kisii.