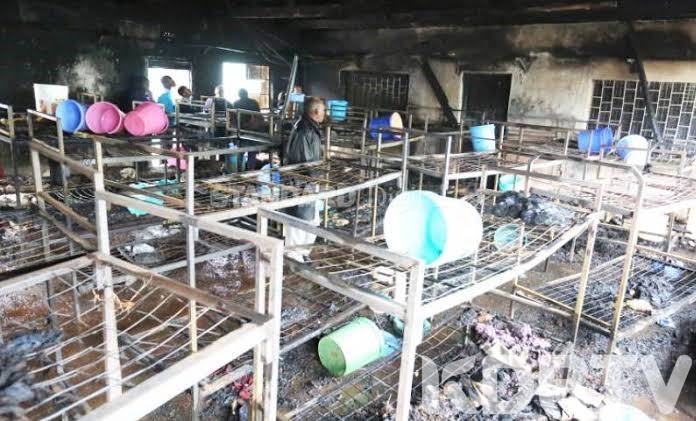 Pupils from Chogoria Girls Boarding School have been sent home after their dormitory was razed by fire on Saturday morning.

The pupils who had just resumed school after the August holidays were forced to go back home as the cause of the fire gets investigated.

Although there were no casualties in the dorm fire, properties and personal effects were destroyed beyond recognition.

It is suspected that the fire was caused by an individual because there was a piece of cloth at the door of the dormitory together with a bottle of paraffin.

Apparently, an attempt to torch the dormitory failed on Tuesday after it was discovered early enough and precautions set up.

“We as a board have decided that the pupils should go home until September, 16. The first group of standard eight pupils will then be expected back to start preparations for their upcoming National examinations,” said County Director of Education, Bridget Wambua.

Wambua also urged the pupils to submit all details that would lead to the uncovering of the pupils involved in the torching.

She asked them to investigate on the own and submit information in secrecy. Ideally, she asked them to be very careful of anyone who exhibited weird characteristics most likely to disrupt learning during the third term.

“I urge learners to share and communicate their problems through the right channels. Burning of schools is not a solution and only disrupts learning pushing pupils behind syllabuses,” said Wambua.

Burning of dormitories has since been reduced after Interior CS and then Education Cabinet Secretary Fred Matiang’i issued stern warnings against those involved.

It was rampant among high schools and secondary schools, where instead of solving disputes or airing out problems amicably, students resorted to burning and torching school facilities to pass their points across.

The parents of Chogoria Girls together with the management agreed to install CCTV cameras to track and observe the engagements of pupils within the school compound.