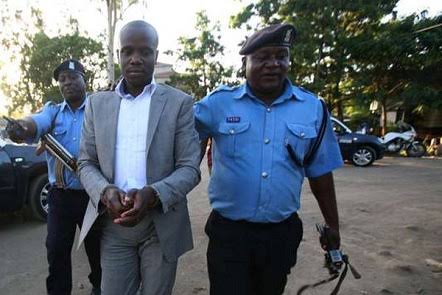 (KDRTV) – The story of the gruesome murder of 28-year-old flamboyant businessman Kevin Omwenga is one which Kenyans will not forget any time soon. The young man was killed in his apartment in Kilimani by one of his closest friends, Robert Bodo Ouko. Robert Ouko is the main bodyguard to controversial businessman Chris Obure whose office is on the first floor of Senteu Plaza in Westlands.

Chris Obure had made an application to the court requesting to be set free as the CCTV footage revealed clearly who the killer of Kevin Omwenga was. But the investigation team poked holes at the CCTV footage provided by his team claiming that it may have been tampered with.

In an affidavit sworn by the investigating officer Bashir Boya, they are still doing some forensic audit to determine the authenticity of the CCTV footage. He also revealed that they have a witness that places Chris Obure in the scene of the heinous crime. They claim that the businessman was in the vicinity to make sure his bodyguard completed the assignment.

The DPP team lead by Alexander Muteti and Wangui Gachuhi told the court that they have evidence to prove that Kevin Omwenga and Chris Obure were very close. Obure had written a statement saying Kevin was not his close friend as much as he knew him. But documents in possession of the prosecution team show that a company called GlobalJet International under the authority of Chris Obure paid for the apartment in which the deceased lived with his brother.

The motive for the killing is still a mystery and we will be following the story closely and update you accordingly. Many Kenyans are speculating that it was because of a deal gone sour.

Chris Obure ordered the killing of Kevin Omwenga but then he wants to throw his bodyguard under the bus, by cooking up a different narrative. #JailChrisObure pic.twitter.com/s995Pwrcdx