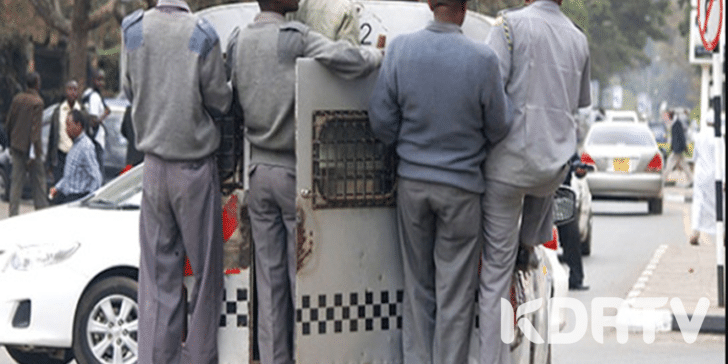 Some Kenyans praised the Askaris for the well done job while the others including the boda boda riders’ association condemning the act.

In the video, it is alleged that the rider was found in the wrong acts of the law and upon inquisition, he staged a fight and dramatically resisted to be move out of the way.

The Askaris were then forced to use their power by dragging the rider despite his antics and screams.

In the recent days, the Nairobi county government has been very strict on boda boda operations within the CBD.

They were completely banned from accessing the CBD due to their rogue behaviors and breaking of traffic rules.

In a recent research on the cause of accidents, boda boda riders topped the list with citations of their heinous acts of breaking traffic rules and being rude to pedestrians.

The reactions ignited by the people online and outside social media affirmed this.

It is very rare for Nairobians to praised county Askaris but in this case they were pampered with all sorts of applauds.

They were even encouraged to be more vigilant and stern when dealing with boda boda riders as they had developed the “untouchable attitude” torturing people in all sectors.

The Boda Boda Association of Kenya however condemned the actions stating that the industry was large enough to accommodate everyone and at the same time calling on the government for justice.