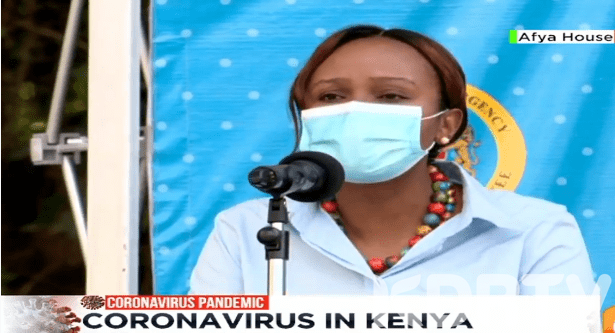 (KDRTV)-The number of people who have contracted coronavirus in Kenya has risen to 1, 745 after the country reported 127 new cases on Friday.

During a presser on Friday, the Health Ministry CAS Dr. Mercy Mwangangi announced that four more people have died of COVID-19 raising the total number of fatalities to 62

Read also: Magoha: A child who is alive and at home is better than that who tried to do an exam and died

According to reports, all the four deaths occurred in Mombasa

At the same time, 17 more COVID-19 patients have discharged from the hospital thus the total number of recoveries are 438

In Nairobi where the highest number of infection was recorded, Kibra had 49 cases, Ruaraka 13, Makadara 4, Westlands 4, Langata 2 while Kasarani, Dagoretti North, Embakasi West and Starehe had one case each

In Mombasa, Kisauni had the highest number of cases at 7 while Mvita had 6, Nyali 3, Likoni 2 and Jomvu 1

In Busia, 8 cases were recorded in Busia town, 2 cases at Malaba border and 6 cases at Alupe Quarantine Facility.

On the other hand, the 8 cases in Uasin Gishu are from Turbo, while in Kajiado the cases were recorded at Kajiado Noth (2) and Namanaga border recorded 3 cases.

In Kiambu all the two cases were recorded in Kiambu Town and Kabete.

KDRTV understands that so far the country had tested 74, 003 samples