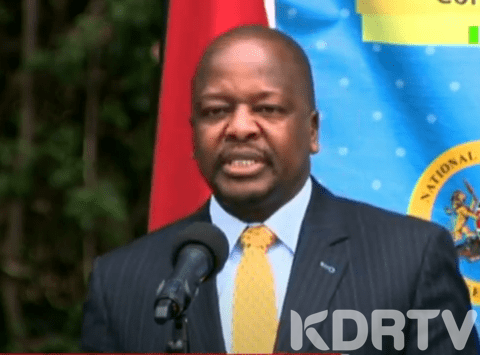 His son Kahush who is a hip hop musician in viral footage was seen as a party with several people something that sparked affront from the public who wondered how Kagwe could urge Kenyans to observe coronavirus guidelines yet his own son was disrespecting them.

In the video, Kahu Mburu Mutahi is seen in a house with a number of friends with several bottles of alcohol on one table with no social distance being observed

In his response, Mutahi Kagwe failed to deny or confirm whether that was his son but he said that all his sons were above 18 years and thus they are accountable for their own decisions

“On the issue you asked about my son, I do not have a son in my house who is less than 18 years old which means that they are adults, you can follow them and ask them,” explained Kagwe.

Many politicians have called for Kagwe`s resignation over the KEMSA scandal; former Kakamega senator Boni Khalwale asked president Uhuru Kenya to fire the CS over the scandal.

“The issue at KEMSA, we have read the same things you have read, we are aware investigations are going on so it started long before I got there. So the issue of anybody asking me to resign is what is called a pipe dream and they can continue dreaming.

“I’m not even aware who that is, but you can tell them to dream on,” responded the Health Cabinet Secretary.

According to Khalwale, CS Kagwe was clueless in combatting the pandemic and also include Jubilee Secretary-General Raphael Tuju, HomaBay Woman Representative Gladys Wanga and Suna East MP Junet Mohamed in the KEMSA scandal

“President Uhuru, fire CS Kagwe he has no idea how to fight Covid. Western high schools’ beds are not medical Covid-19 beds and finally KEMSA money paid to Raphael Tuju, Gladys Wanga and Junet Mohammed should be channelled back to Covid flight,” stated Khalwale.