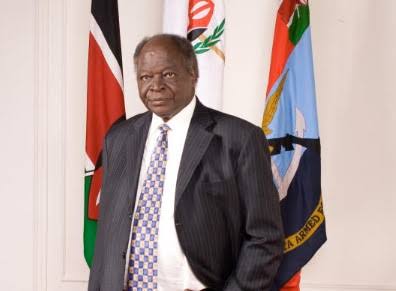 It is unusual for a senior government official, let alone a former President, to appear in court.

However, on September 23, 2013, former President Mwai Kibaki appeared before Nyeri’ s Environment and Land Court to testify in a case regarding a multimillion- dollar skyscraper in Nyeri town.

Mzee Kibaki was testifying in a case in which he was attempting to reclaim ownership of a commercial property registered as LR No. Nyeri Municipality Block 1/94 in the town centre, claiming that it had been seized.

Mr Kibaki testified before Justice Anthony Ombwayo that his firm, Mathingira Wholesalers Company Limited, which owns the 0. 0697- hectare land, had been taken over by imposter directors.

This was the first appearance of a former Head of State before a court.

Though Kibaki was considered wealthy, he gained national attention when he appeared in court to defend his interest in a small and obscure company he founded with seven childhood pals.

Kibaki stated during cross- examination that he purchased the property in 1976 as an investment with his seven village mates from Othaya.

They then founded Mathingira Wholesalers Limited in 1983 after purchasing a commercial one- story facility in Nyeri town near the local Kanu branch office.

However, a court case brought in 2008 by a new board of directors at Mathingira Wholesalers established that the Kibaki family had sold their shares and had no ownership in the company.

Mr Peter Ndung’ u, one of the witnesses, previously testified that Mr Kibaki’ s brother Githinji sold him all his shares and then ceased attending shareholders meetings.

According to the former president, he was not aware of parallel management and was not invited to business meetings.

He stated that the individuals joined the group unlawfully, withheld rent proceeds from 2008, and ousted several founding members, including himself, prior to the 2007 General Election.

While testifying before the judge, he described the course of events as a shame, stating that he would have arbitrated the disagreement had he been aware of it sooner.

At the time of his death on Friday, he and the other founders had not received rent from the building since 2014.

Subscribe to watch latests videos
In this article:President Mwai Kibaki