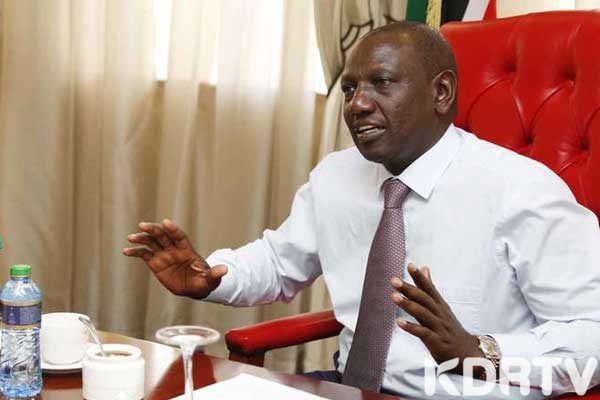 A recent Interview by a TV journalist has Put Deputy President Ruto on the Spot over the Big Four Agendas and his 2022 Ambitions.

The Deputy President was taken by surprise at a recent interview that held him on the spot on matters concerning the government.

The close to an hour interview had the deputy president answer to some of the hardest questions, with questions on his achievement in government as the second in command.

All sectors of his life were questions both personal and work.

For instance, the claimed plot on his assassination turned the DP into defense mode asking the interviewer about her personal life and whether she had children or not.

He had developed a divert tactic that left him avoiding all the questions asked and channeling different topics.

The DP was asked on the declaration of his wealth and his net worth, which he diverted with responses of a proper procedure to be followed to get such information.

The most interesting questions revolved around the big four agendas and the achievement so far.

The Deputy together with the President had promised to deliver more than four stadiums during last general election campaigns.

It turned out everything was all fake as so far, none of the stadiums is complete and close to zero progress ongoing.

Ideally, on the issue of unemployment, youths are still jobless with no plans to create employment or jobs., with recent case of a PHD student with first class living in the streets.

The DP differed with the sitting government statistics as he disclosed details of his own statistics regarding SGR and other vital matters.

He termed the rest of the information fake news that was full of propaganda and misleading to Kenyans.

Kenyans on social media were very unimpressed with the interview terming it as boring with no questions being answered.

Although heavy punches were thrown at the DP in an attempt to get clear and direct answers, he diverted them with a proper tactic that left him not wounded.