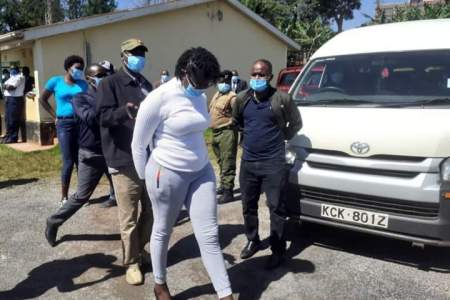 (KDRTV) – One of Governor Okoth Obado’s daughters has found life at Kileleshwa Police Cells very hard to bear as realities dawn on her that she is a guest of the state.

Obado was arrested with his four children; Dan Achola, Scarlet Susan, Jerry Zachary and Evelyne Odhiambo over corruption charges on Wednesday last week. A local daily reported that it has been a baptism of fire for the family of five.

The Governor’s two daughters; Susan and Evelyne have been sleeping on cold floors with neither a mattress or blanket at Kileleshwa. They have also not been spared from normal routines at the station which includes cleaning their cells.

According to the Standard, Susan Scarlet has worried police officers at the station with her weird behavior. The University of Nairobi alumni has been spending all her days sleeping at the corner of her cells. She does not speak to anyone.

This worried police officers at the station who inquired what was troubling her.

“At first, we thought she (Scarlet) was sick but after interrogating her, we came to learn that she was only in shock and bored,” the officer told the Standard.

While at studying law at UoN, Susan drove high-end cars and lived like a queen in Parklands. It seems she was wondering how low she has sunk.

Fortunately for her, the court will today make a ruling on their bail application and she might spend the night at one of her father’s kingly mansions.

Subscribe to watch latests videos
In this article:Headlines, Okoth Obado