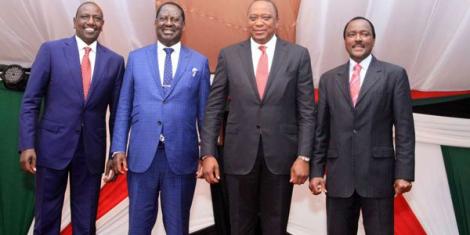 Deputy President William Ruto has been having secret meetings with NASA principles ahead of the 2022 General Election, Mombasa Governor Hassan Joho has claimed.

Joho said that Ruto has been in talks with the coalition leaders but didn’t specifically mention who among the Nasa leaders was secretly meeting the DP.

He added that the Orange Democratic Party is however not worried about the negotiation but Ruto should not focus on dividing Kenyans.

“Currently, we are even aware some of them are in negotiation with UDA but as ODM we are not complaining,” said Joho.

“Why should they continue dragging Kenyans seeking a united country?”

Amani National Congress party leader Musalia Mudavadi and Ford Kenya leader released statements denying that they have been in talks with the DP.

ODM Party has also started talks of a possible coalition with President Uhuru Kenyatta’s Jubilee Party which is expected to accommodate other political outfits.

The coalition is expected to give DP Ruto fierce competition in the upcoming Presidential election.

President Uhuru Kenyatta has been on fire after other members of the Jubilee party denounced his plan to support NASA in 2022.