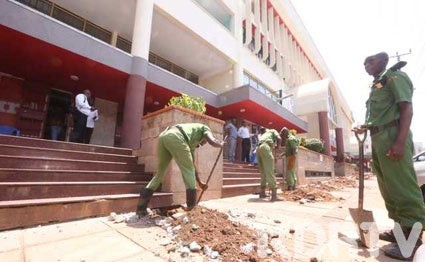 Kisumu property owners have been thrown into a panic mode after a multi-agency declared a number of buildings most likely to face demolitions.

According to the multi-agency, the upcoming Kisumu port is aimed to take over much spaces and buildings located along the designated area will be brought down to create space for that.

Ideally, it is alleged that Kenya Railways land was illegally acquired and the government is aimed to recover it.

“Most of these lands and properties pursued for recovery were obtained illegally and it is evident through the changes of ownership over the years. Thirty three other properties are on the line and will be brought down,” read the statement from Ethics and Anti-Corruption Commission (EACC).

Among the properties that were marked is Swan Center Mall which is associated with a flamboyant South Nyanza politician.

The building was marked and fenced in a bid to pave way demolitions although no word has since been heard from the said owner.

The tenants who had occupied the multi-million estate were shocked after the National Youth Service (NYS) descended on them and kept the property locked under fence.

“We were going on with our normal working activities before a group of the NYS marked our building and started fencing it. It was so unaware and none of us knew what to do at the exact moment,” said a tenant in the building.

According to the Kenya Railways, the Swan Center was built on their land and their efforts to recover it had borne no fruits in the past years.

The progress was hence instigated by the EACC in a bid to recover Railway land that had been grabbed over the years.

Kisumu is currently among the top three cities that are growing rapidly in terms of development and businesses.

Ideally, the revenue collected from the economic activities in the region play a huge role in steering the Country’s big four agenda.

The Kisumu port is a project instituted from the handshake between ODM leader Raila Odinga and President Uhuru as a way of Building Bridges.

Panic as buildings in Kisumu face demolition: Tenants at the multimillion property were caught unawares. https://t.co/SfLG1e8bqk

The port which is expected to be commenced in a couple of months received a major boost from the World Bank after the planned project was approved.

Although demolitions were expected to pave way for the Kisumu Port, most of property owners explained that the move was unplanned and they were totally unprepared for it.

“We totally support demolition of structures build on illegally acquired public land. However, the government should put up measures to ensure service provision is not interrupted in the process,” said Lilian Wavinya.