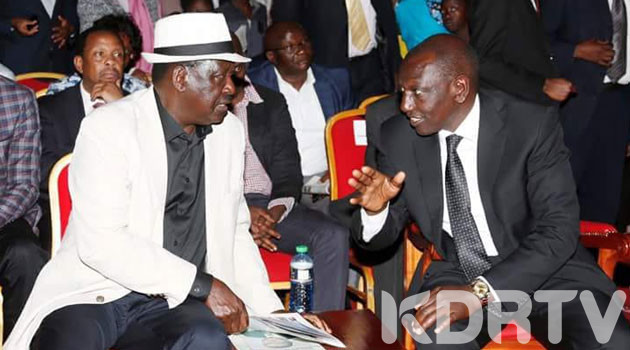 The DP Ruto posted a snapshot of the daily on his official twitter page, denouncing the content of the publication and asserting that Raila Odinga led party used violence, chaos, and terror to win the by-election.

“The ONLY strategy and structure Tinga’s party had which largely succeeded was,violence, chaos,mayhem & terror meted out by organized baba’s militia the same instruments used by terrorists organizations including outlawed groups. How sad they have learnt nothing from handshake!” read the tweet.

Surprisingly, the tweet came a day after Ruto sent a congratulatory message to ODM`s Imran Okoth after his victory in the Kibera by-election.

Read also: Mugwenu doctors did what hospitals could not do for years. My child was dying.

A few moments after the Independent Electoral and Boundaries Commission (IEBC) presented a winning certificate to Imran Okoth, DP Ruto did not buy time to show his interest in the Raila`s ‘bedroom’.

According to Ruto, the Raila led party has retained the seat while had served notice.

Through twitter, the Deputy President alluded that Odinga used illegal groups and militia terrorists as a tool to confront innocent supporters whose responsibility was to exercise their democratic rights.