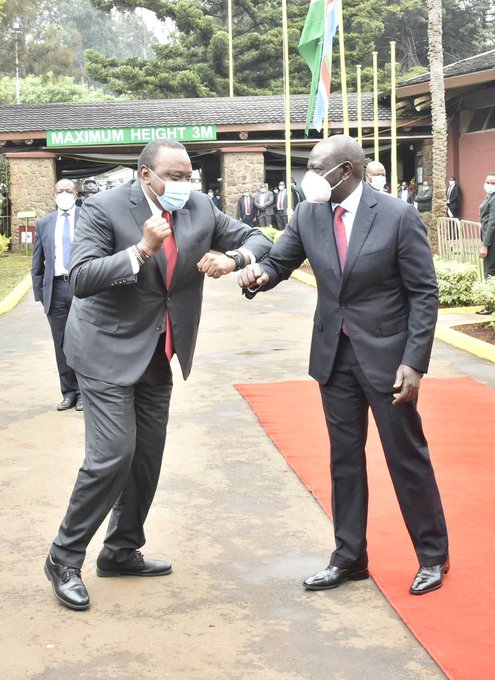 KDRTV NEWS: Deputy President has responded to news headline that president Uhuru Kenyatta will back NASA presidential candidate in 2022.

In his response, the second-in-command is concerned about what will happen to eight million Kenyans who sang tano tena.

However, DP Ruto resolved to seek the support of God as he continues with his State House bid in 2022.

DP Ruto took to his Twitter account to respond to a headline published by a local daily about President Uhuru`s plan.

🙆‍♀️🙆‍♂️🙆🙆‍♀️🙆🙆‍♂️EUCHO!!NGAI FAFA MWATHANI!! So, what happens to the Thurakus, the kumìrà kùmèrà contingent, the 8 million of us?? None, no youth, no woman, no man of the 8M who woke up early and voted 3 times for UK/WsR ticket merit support? Sawa tu! Tutajipanga na support ya MUNGU. pic.twitter.com/nz0oIxw86k

According to reports by the star, President Uhuru pronounced that he will support one of the NASA principals if they united and have a consensus on a single candidate.

The announcement by President Uhuru indicates that he is ready to back DP Ruto in the 2022 polls as he promised during their Jubilee party campaigns.

This is the first time Uhuru is urging NASA principals to united to strengthen their chances of winning the 2022 polls and forming a government after his term comes to an end.

KDRTV notes the DP Ruto and President Uhuru Kenyatta have had frosty ties in Uhuru`s second term: the President has on many occasions signaled that he is politically done with his deputy.

The declaration by the President has come even after NASA principal and ANC party leader Musalia Mudavadi recently alleged that NASA has died a long time ago.

He said the alliance cant continue holding together while there is no trust among the principals.

KDRTV understands that the NASA alliance plunged into woes after a handshake between ODM party leader Raila Odinga and President Uhuru Kenyatta.

In March 2021, DP Ruto said that Raila and Uhuru would have not held high offices without his support.

He had also said that his boss is free to work with anyone he wished in his administration.