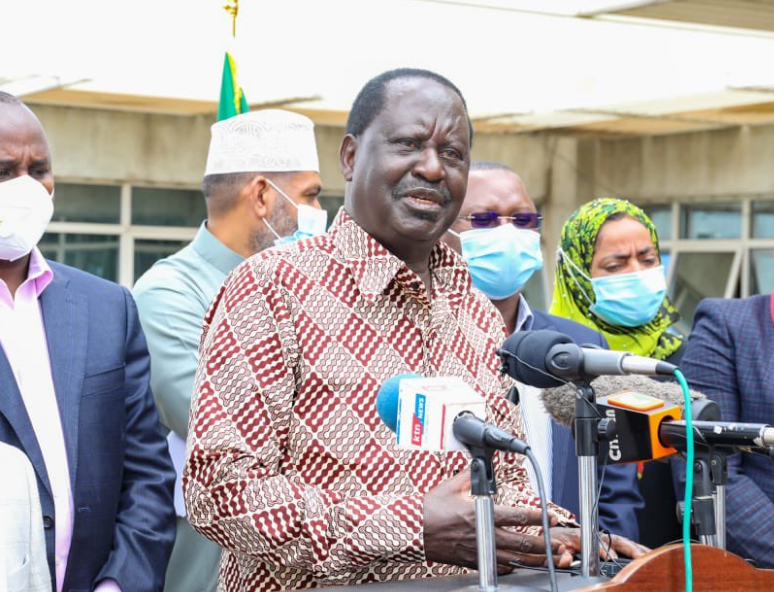 KDRTV NEWS: The Orange Democratic Movement (ODM) party and former Premier has in his recent move’ betrayed’ the closeness he has enjoyed together with President Uhuru Kenyatta.

Mr. Odinga in a statement has compelled President Uhuru to table evidence that the 6 committed judges were not qualified for an appointment even after they were recommended by the Judicial Services Commission (JSC)

President Uhuru Kenyatta has been on a receiving end after he committed six judges.

In a statement sent to media houses on Sartuday, Rail Odinga has urged the President, the Speakers of the National Assembly and Senate, and the Chief Justice to seek common ground to appropriately apply their powers as soon as possible to attain stable government.

Many high-profile leaders had condemned President Kenyatta for committing the six names: they include ex-chief justice Willy Mutunga and former Chief justice David Maraga as well as Law Society of Kenya (LSK)

“In the current stand-off between the Judiciary and the Executive, this sense of the intertwined fate of the branches of government seems lost,” Raila said.

At the same time, Rail challenged President Uhuru Kenyatta to table concerns and evidence that led to the omission of the six judges.

“The country deserves an informed debate rather than a shouting match on this critical matter. The people of Kenya deserve to know why the various branches of their government take the positions they do on an issue critical to nation as appointment of judges,” Raila said.

In the viewpoint of the ODM leader, the nation cannot survive a war between its institutions.

“Before we gave ourselves the 2010 Constitution, we had gone through an era where this doctrine had been abused and the Executive branch of government had interfered with the functions of the other branches, making democratic governance impossible,” Raila said.

Raila also noted that since the establishment of the current constitution, the three branches of the have engaged in a war of competition that has greatly cost the nation.

“The fact is that no one branch of government can help Kenyans solve their problems without the help of the other,” the ODM leader said on Saturday. “No one institution can become the sole and undisputed liberator of the people of Kenya.”

Raila also expressed his concern that the interest of Kenyans and that of the nation will be strained if any of the branches of government will tend to show that it is the one matter than others.

Raila Odinga has for the first time in many months come out publicly to condemn his ‘brother’ President Kenyatta after the handshake.

Many people have expressed their outcry that Raila Odinga as the opposition leader has been sleeping on his role.

Raila’s recent move could be considered to be a betrayal to the handshake after Uhuru recently visited Nyanza and launched numerous projects.