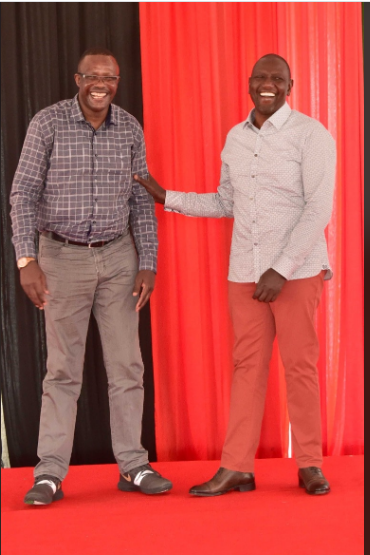 (KDRTV)-Eliud Owalo was the head of Raila Odinga’s campaign team in 2013 and he was accused of misappropriating almost 5 million shillings that were meant for the campaign. These allegations made him lose his place in Raila Odinga’s heart and he was kicked out of the orange house.

Owalo tried to make a comeback in politics during the 2019 Kibra by-election but sensing that he might not get the ODM ticket due to the bad blood that exists between him and the former prime minister, he joined Musali Mudavadi’s ANC but he lost to the ODM candidate.

ODM had accused him of being a Ruto mole that was out to split ODM’s votes, claims that he strongly denied affirming his support for Raila Odinga and Musalia Mudavadi.

Owalo said that he is a principled man that cannot the team of thieves led by William Ruto. First forward, Owalo shamelessly joined William Ruto today after resigning from his position in ANC a few weeks ago, and in his statement, he aimed a subtle dig at Raila Odinga for trying to change the constitution to ensure political preservation and personal aggrandizement.

He feels that there is nothing wrong with the constitution and that he feels William Ruto is the man to steer this country on the path of development and democracy.

ALSO READ: Did DP William Ruto Save Oscar Sudi From Arrest On Friday?

Owalo has proven that there are no permanent enemies in politics but going hard against Raila might not be a good idea if he still intends to vie in Kibra come 2022.

Here is his statement that has caused an online debate;

Over the past two months, I’ve done a great deal of internal reflection, consulted widely, scanned, and analyzed emerging issues in the political environment.

The real problems facing Kenya today are high levels of unemployment; high costs of living; blatant corruption; spiraling debt at all levels; and loss of purchasing power of the consumer.

We are also witnessing a worrying trend where the democratic space we have witnessed over the past two decades is drastically diminishing as a result of impunity and wanton disregard for the constitution.

Regrettably, a section of the political class appears uninterested in addressing the real challenges afflicting the common citizen; but instead opting for the pre-occupation with amassing wealth and pre-mature agitation of change of the constitution to ensure political preservation and personal aggrandizement.

If you ask me,90% of Kenyans are not even adequately sensitized on Kenya’s 2010 Constitution; no candid evaluation of the implementation status of our 2010 constitution has been undertaken to determine the milestones realized, challenges faced, implementation gaps, lessons learned, and emerging issues that can then objectively inform constitutional changes, if any?

One, therefore, wonders the rationale behind the urgency in unilaterally rushing to the radical conclusion that we need a constitutional change that is not informed by a technically-feasible position.

My honest opinion is that our problem is not a bad constitution but a lack of enforcement and political goodwill and capture of the state by a few individuals in total disregard for the interests of the Kenyan majority.

Equally, there appears to be a worrying scheme by a few select and privileged families to unilaterally decide the leadership of this country in total disregard for the will and wishes of the 45 million Kenyans.

More worryingly, there are concerted efforts by the same clique of people to put together ethnic congregations as an avenue of attaining political power.

I’m vehemently opposed to and do not subscribe to the school of thought that two or three families should selfishly scheme to rotate the leadership of this country among themselves as a means of perpetuating themselves in power and serving their egocentric economic interests.

That, to me is not only a travesty of justice but also a tragedy of epochal dimensions.
It is my well-considered opinion that to save our beloved country from the current economic morass and political quagmire, Kenyans need to collectively and individually embark on forging unity of purpose across the country;

discard the retrogressive culture of negative politics built around ethnic enclaves and tribal chiefs, and chart a new political order aimed at bringing about sanity within our national political fabric to realize economic emancipation and re-establish an equilibrium away from the jaws of the forces of state capture.

My humble submission, therefore, is that we need a decisive; progressive; responsive; all-inclusive; and participatory leadership anchored on people-centric values; social justice; recognition of human rights guided by the rule of law; and responsiveness to the challenges facing the common Mwananchi.

Based on the foregoing and informed by a contextual analysis of all the probable 2022 Presidential candidates, I have with effect from today made a deliberate and conscious decision to stand with Kenyans by pursuing my political interests and aspirations within the ambit of the “Hustler” Political Matrix. I’m also going the full-hog with Bill Ruto’s 2022.