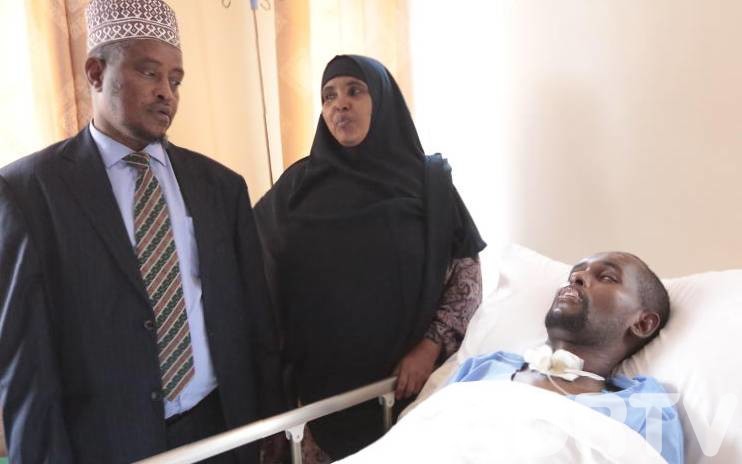 Dr Aden Mukhtar and His wife Jabo Aden besides the bed where there son Idris Mukhtar has been resting ever since he jetted back from India in January 2019.

The Family of former Garissa Finance CEC Idris Mukhtar who still has a bullet lodged in his head is planning to fly him to Turkey for further treatment.

Dr Aden Mukhtar who is the father to the CEC who has been in a coma since he was shot on the head by gunmen said that the health of his son had drastically improved.

“He is able to breath and also take oral liquid through his mouth, he can also make small gestures,” Dr Aden said.

Dr Aden said that the family hoped for the best even as he reminded the Directorate of Criminal Investigations to ensure that Mr Mukhtar gets justice.

The former Finance CEC and insider to former Garissa Governor Nathif Jamac was on August 19- shot in his car at the parking bay of a restaurant near the Kileleshwa mosque where he had just attended 8PM prayers.

Immediately after the deadly shoot-out Mr Mukhtar spent over a month in the Intensive Care Unit at a city hospital.

He was later taken to India with the hope that doctors would remove the bullet from his head in vain.

Doctors in India advised the family that if they attempted to remove the bullet that was still lodged in his brain it would risk his life.

The main suspect in the attempted murder of Mr Mukhtar one David Mwai who was captured by a CCTV footage pulling the trigger died days later inside the Parklands Police Station and the police ruled it out as suicide.

However, the family is on record saying it doubted the police version since Mr Mwai died just days after giving a shocking revelation of what had transpired.