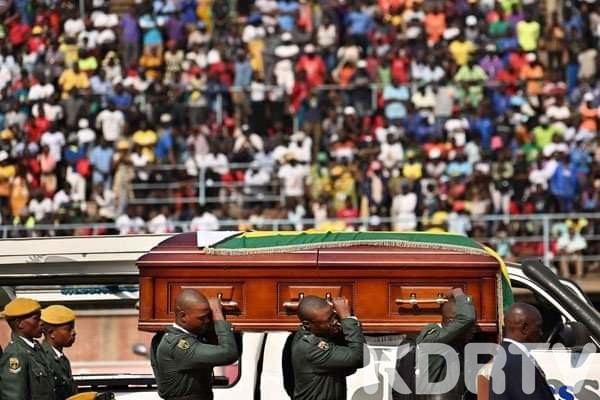 The body of the Late Mugabe arriving at Rufaro Stadium hoisted by soldiers in uniform. picture taken from twitter.

The family of Africa’s strongman and fallen giant Robert Mugabe are in a squabble over the site and date of burial, not wanting to go against his last wishes.

According to the family of the ex-Zimbabwean President who was considered a dictator, they were unclear over the burial site and the date planned to lay the man to rest.

His body arrived on Thursday at the famous historic Rufaro Stadium hoisted by soldiers in uniform.

Ideally, it is alleged that tension was erupted after the current President of Zimbabwe Emmerson Mnagangwa collided with the family members by setting up a burial place without their approval.

The family wanted a private burial ceremony while the President suggested a public one involving Zimbabweans as the man had made significant contributions to the country.

“His body will be at Kutama State on Sunday night where a private burial ceremony will be followed either on Monday or Tuesday,” said Leo Mugabe who is the deceased nephew.

Leo additionally said that the decisions was unanimous by the family and that their Hero Mugabe would not be laid at the National Heroes square as proposed by Government.

#LeoMugabe addressing journalists says the family wishes to have a private burial, Chiefs and family are in a meeting… Adds that for now, he does not know when and where #RobertMugabe will buried.pic.twitter.com/ElKuQQQxDs

The death of Mugabe came immediately after a short illness that came about after a dramatic and forceful ousting from the Presidential chair.

Mugabe had ruled Zimbabwe for almost 30 years and was forced to resign under tight orders and military standoff, something that ignited different reactions of people across the world.

Mugabe together with his wife and sons were regarded as high spenders having spent the government funds to better their lives and interests while the people of Zimbabwe were living in shambles and poverty.

His children for instance were known to be partying form one corner of the world to other, wearing designer clothes and driving the latest models of cars.

“We are suffering and living in poverty. Can barely afford life necessities yet out taxes are used to buy houses in different countries and drink expensive alcohol,” lamented a user on twitter after a viral video of Mugabe sons emerged showing massive expenditure and wastage.

READ ALSO: President Uhuru Orders Kenyan Flags To Be Flown At Half Mast For Three Days

Regarded as a dictator by the white men, it is believed that his tough stand was to keep the white man away from occupying the African land and maintain the Zimbabwean wealth to their people.

Although the burial death is still unclear, Mugabe remains a hero among his family and other netizens due to the various changes and development through a dedicated work of service for almost 30 years.