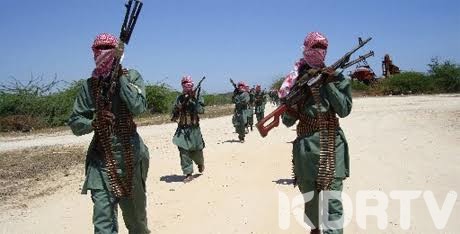 The government has dispatched KDF soldiers in Wajir to hunt down suspected Al Shabaab terrorists who attacked a police station on Tuesday night and killed two of their colleagues who had been arrested and were being held at Dajabula Police Station which is located 13 Kilometers from the Somali border.

According to a police brief sent to Vigilance House, the attackers capitalised on the heavy rainfall being experienced in the region to launch an attack at around 8 PM on Tuesday night.

They used advanced weapons including RPGs to force their way into the station.

“It was dark and the officers dispersed in different directions from the camp and exchange of fire ensued,” the statement reads in part.

Locals say they heard heavy gunfire for more than 20 minutes, meaning this could be the time the terrorists engaged the police and KDF soldiers.

BREAKING: Heavy gunfire reported in Dadajabula, Wajir South. Word is, the police station is on fire, heavy barrage of artillery and RPGs reportedly being fired as security forces including the military battle with attackers.

According to the brief, the station had 16 policemen, all of them can be accounted for. However, one of the policemen has a bullet in his stomach while another one was shot in the hip with the bullet exiting.

“Now being attended at Dadajabula Dispensary. They need further specialised treatment and arrangements being made,” the brief reads in part.

Detectives believe the terrorists attacked the station to rescue their colleagues. It is however not clear why they ended up killing them.

“We suspect the attackers killed the suspect in custody to conceal some information about Al-Shabaab,” a police informant told a local daily.

Nothing was stolen during the attack.