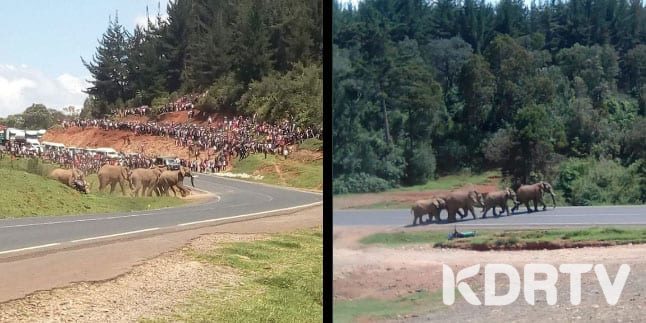 A herd of five lost elephants that had caused a standstill in Laikipia on Friday has been spotted at the border of Elgeyo Marakwet and Baringo Counties.

A residence told KDRTV that the animals were spotted in Tugumoi and then in Maji Mazuri near Baringo-Kericho Border.

According to our evaluation, the locations are 48 minutes apart by car and 7 hours on foot.

“A herd of five male elephants on migration from Laikipia to Mau have lost their route and are wandering around Timboroa forest dam. You are advised to exercise caution if in this area. Our teams are currently on the ground,” the statement issued on Friday reads.

Read Also:DP Ruto is just a shell in Jubilee after the Handshake, Kalembe Ndile claims

KDRTV received reports that the traffic had been brought to a standstill in Laikipia on Friday as the herd of elephants slowly crossed a road near Timboroa Forest.

Reportedly, hundreds of residents gathered around to the scene to watch a rare show.