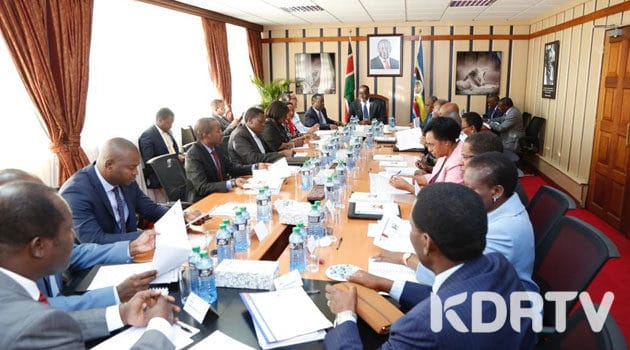 President Uhuru Kenyatta has appointed Interior  CS Fred Matiang’i to be the one chairing weekly cabinet meetings to assess how the government is running. The new directive will see  the head of state only chair cabinet meetings on issues of emergency and grave concerns. Any other briefs from the Cabinet will be channeled to him by Matiang’i or Head of Public Service Joseph Kinywa.

“The Cabinet meetings [are held] weekly under Matiang’i to assess the implementation of all government agendas. The President only chairs the meeting when there is a major issue like the budget or a crisis,” a Cabinet Secretary  confided in a local media house.

This new directive sidelines DP William Ruto even further, considering the January Executive Order One, in which President Uhuru appointed the super CS country’s unofficial Prime Minister. Insiders from State House reveal President Uhuru Kenyatta does want to engage in a public exchange with the DP so he has given him ample time to engage in 2022 politics.

Currently, most government business is now transacted through Cabinet subcommittees which meet regularly and report to Matiang’i. The committee is the committee is tasked with  providing  supervisory leadership throughout the delivery cycle of all national government programmes and projects.

In the January Executive Order, Uhuru established four powerful committees with Matiang’i at the helm. The Matiangi-led National Development Implementation and Communication Cabinet Committee will report directly to the President. It would provide overall supervisory leadership throughout the delivery circle of all national government’s programmes and projects.

It has placed the Super CS at the helm of power. Matiang’i has been in  charge of the implementation and monitoring of all development projects initiated and funded by the national government through a new Cabinet sub-committee.

The sub-committe is  known as the National Development Implementation and Communication Cabinet Committee. It brings on board all CSs, Attorney General Kihara Kariuki and Head of Public Service Joseph Kinyua. Under the directive, the conceptualisation, monitoring, implementation and evaluation will be done right from the grassroots.

Subscribe to watch latests videos
In this article:CS Fred Matiangi