The woman raised alarms which sought the attention of police officers who were on patrol at Milima area, Lang`ata to rush to the residence in Hardy area

The police has issued a statement indicating that an officer, Emmanuel Maiyo was forced to shoot in the air once when they arrived at the scene after the lady identified as Joyline Chemutai sought help.

“The incident happened at 12.10 am when police officers Emmanuel Maiyo and Mercy Ng’eno were on patrol within Milima area when an alarm was raised at Hon Joshua Kutuny’s residence at Hardy area,” part of the statement read. 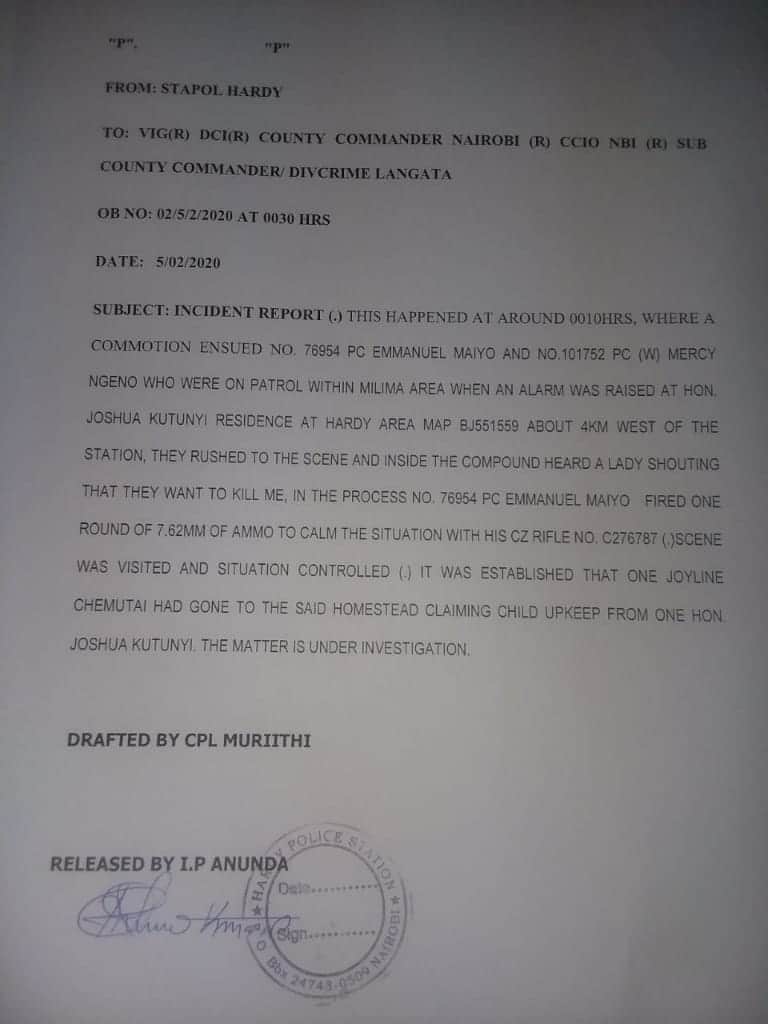 “The officers rushed to the scene and found a lady inside the compound saying she wanted to be killed. The officer (Maiyo) was forced to shoot in the air with one round of ammunition to calm the situation. It was established than one Joyline Chemutai had gone to the said homestead claiming child upkeep from Hon Joshua Kutuny,” the report read

By the time the post was published, the police were still conducting a probe into the matter.

The woman alleged that she sired a child by MP Joshua Kutuny and thus was demanding child upkeep from Jubilee`s MP. ”

For instance, in July 2019, Jubilee nominated MP Maina Kamanda sought the help of the court over child support after a woman alleged that they engaged in a romantic affair.

Esther Wanjiku, a nominated Member of County assembly compelled that the MP be forced to pay Kshs 220, 000 maintenance fee after he denounced his role to care for the kid

Even though, the case is still pending

In another case, Homa Bay Town MP Peter Kaluma told a court in 2014 that his salary was not enough to afford upkeep for a child he sired with ex-lover