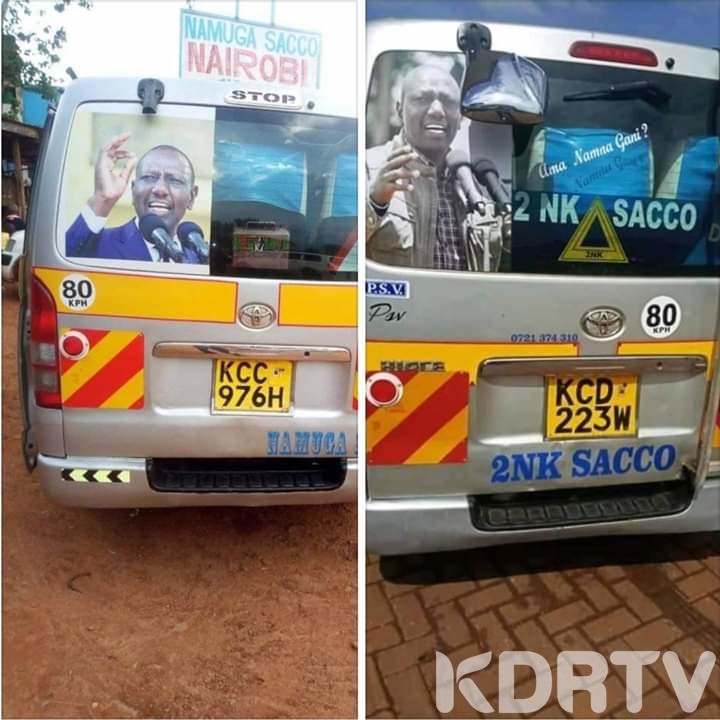 2NK and Namuga Matatu Saccos have branded their vehicles with Ruto’s pictures and the slogan ‘Ama Namna Gani!’ which is one of the DP’s most common phrases.

Nyeri is ripe for a revolution.. pic.twitter.com/EQCzpfouxT

Ruto enjoys a huge following in Mt Kenya region but it is in Nyeri where he has a fanatical following.  Here,  he is the kingpin.

He has visited the county on numerous occasions, sometimes without security.  But he still feels at home.

Read Also: Kikuyus Will Vote for Ruto Because He is a Thief Like Them

Last week President Uhuru Kenyatta visited Nyeri and the locals send him with only one message, greet Ruto for us.

Uhuru was inspecting development projects at the Chaka Open Market.

I hope the president will pass on the greetings next time he meets DP William Ruto 😅pic.twitter.com/QwUUOP97l7

We can’t tell at the moment if Uhuru delivered the message to Ruto.

The two are not on good terms as the President has declared war on Ruto’s Mt Kenya allies.

In January,  Uhuru fired former Agriculture CS Mwangi Kiunjuri over his dalliance with Ruto.  Former Nyeri Senator Mutahi Kagwe was appointed the Cabinet as his replacement.

Uhuru is not happy with the DP’s allies opposing the Building Bridges Initiative, which is his pet project with ODM leader Raila Odinga.