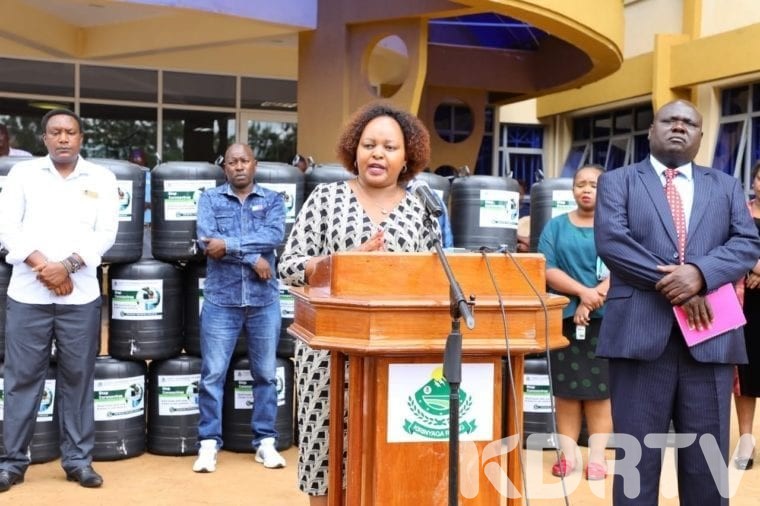 (KDRTV) – Jubilee Party has outed the Kirinyaga County Assembly Majority leader as one of the measures to save embattled Governor Anne Waiguru from a looming impeachment.

Tuju said that Murango cannot be trusted to lead government business in the assembly following what has been described as gross misconduct from him.

‘It is no longer tenable for you to lead Government business in the county assembly, we find this behaviour of refusing to listen to the party headquarters to be gross misconduct as articulated in article 13 of the party constitution’ the letter said.

Murango had written a letter to the party headquarters complaining about the leadership of Governor Waiguru.

However, Raphael Tuju has accused the Majority leader of raising personal issues. The Party boss said that only two issues raised in the letter were valid.

A motion to impeach Governor Waiguru was tabled on the floor of the assembly on Wednesday. KDRTV understands that the motion is being supported by all but on MCA, throwing Waiguru’s future to the wind.

Mutira ward MCA David Kinyua Wangui who is moving the motion wants the governor impeached over what she terms as a gross violation of the constitution, abuse of office and gross misconduct.

MY STATEMENT ON THE IMPEACHMENT MOTION TABLED BY THE COUNTY ASSEMBLY ON 31ST MARCH, 2020https://t.co/k0iWsNGn9n pic.twitter.com/r4KQ2ZYY4P

On her part, Waiguru has said that the motion is frivolous and petty. She asked the MCAs to concentrate their energies on curbing the spread of COVID-19 pandemic.

“The issues raised are so basic that they are an embarrassment to the Constitution that they seek to protect and the County that elected these MCAs,” she said.