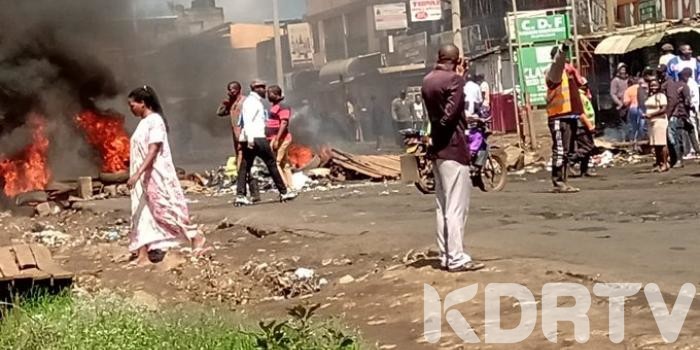 KDRTV learned that the operators lit several bonfires with tires and blocked sections of the Kasarani-Mwiki road with stones and sticks.

KDRTV talked to a representative from Mwiki Sacco that has its matatus operating in the route, who expressed their frustrations which they blame on the county government of Nairobi

The police reportedly arrived at the scene at around 10 a.m to disperse the protesting matatu operators

“These protests have been going on since December 2019. This is not a feeder road, it is the main road from Kasarani.

“The people we have elected like MCAs and the MP are not doing anything. Things on the ground are bad, you should see for yourself,” stated the representative.

The noisy protest started at around 6 a.m and was disrupted when the police arrived the scene lobbing teargas canisters sending the protestors scampering away

“It is only now that the protests are dying down. The police are still here,” said one of the protestors

Conman @RailaOdinga's mouth is full with despotic crumbs when innocent unarmed Kenyans are being brutalized in Kasarani and other parts of Kenya. Despot Uhuru Kenyatta thrives on violence. It is time Kenyans woke up and removed this drunken tyrant from his illegitimate position. https://t.co/QO4XgQ07gY