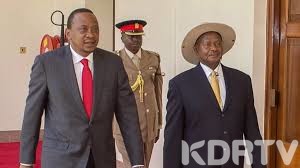 President Yoweri Museveni has today met and held a bilateral meeting with President Uhuru Kenyatta of Kenya on the sidelines of TICAD 7 conference in Yokohama, Japan during which the two leaders discussed the issue of sugar and sugarcane exports to Kenya.

During a joint permanent commission meeting in Mombasa last March, it was agreed that Kenya’s importation of sugar from Uganda would increase from 30,000 tons to 90,000 tons per annum but the process has delayed.

According to reports, the importation licenses are issued by Kenya’s Ministry of Agriculture which delays to issue them. President Museveni said there is need to fasten the trade process.
“Ugandans have grown too much sugar cane, they want to export sugarcane to Kenya. We don’t allow export of unprocessed sugarcane but because of the quantity, they were saying that we suspend the ban of export of raw sugarcane and allow Kenyan factories which are willing, to buy it,” he said.

During the meeting, the two leaders also discussed bilateral issues affecting their two countries. President Kenyatta invited President Museveni for a meeting in Moroto where he will be for a working visit on Thursday 12th September 2019. During the visit, Uganda will showcase what they have done in Moroto to fight drought and witness the signing of an MOU between the Turkana and Karamojong.