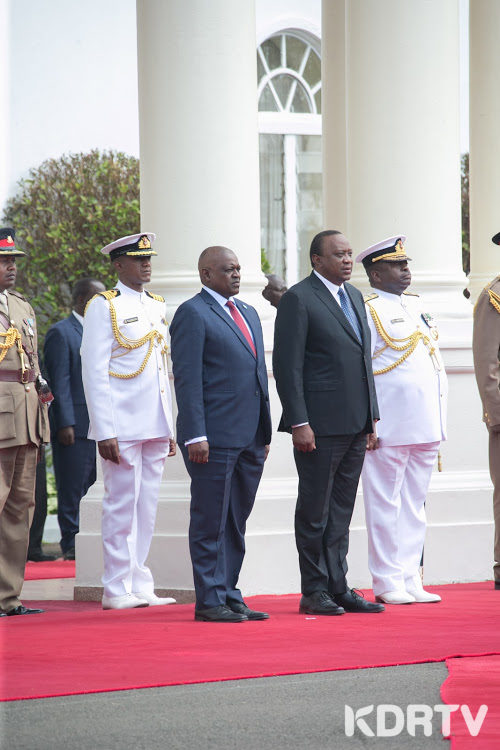 The Botswana head of state on his three-day state visit, was formally received on Tuesday morning by President Kenyatta at a colorful ceremony at a State House Nairobi. President Masisi received a 21-gun salute and a parade of honor, preserved for visiting Heads of State.

The meeting between the two heads of state witnessed the signing of agreements which cover three key pacts between the two countries; bilateral trade, air transport and ICT.

Botswana vows to support an endorse Kenya’s bid for a seat at the UN security Council once the opportunity arise later in the year out of “trust” that Kenya would support it, too, in other international bids.

Botswana will vote before Kenya votes itself in. This is out of a desire to further nourish our friendship because we trust you with your willingness to engage with our issues that need broad discussions at the United Nations,” he said during a briefing with President Uhuru Kenyatta.

President Mokgweetsi Masisi said his private talks with President Kenyatta and the bilateral meeting between their respective delegations goes to strengthen the close historic ties between the two countries. This is seen after the signing of an unimplemented MoU between the states in 2006.

In 2018, Botswana exported goods worth 182, 406 U.S. dollars to Kenya and these goods mostly consisted of vehicles, tractors, articles of textiles and plastics, according to statistics published by Xhinua.

“I wish to reiterate Kenya’s commitment to continued co-operation with Botswana, both at the bilateral and multilateral levels, to further deepen our bonds of co-operation and friendship,” President Kenyatta said at the breifing.