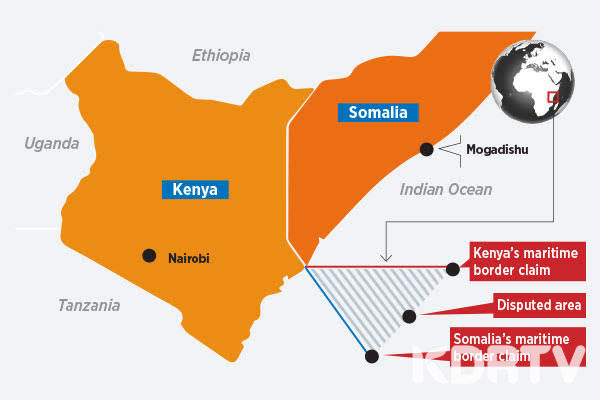 Kenya may deploy the military to the disputed maritime border with Somalia if a motion tabled in parliament is approved.

Somalia sued Kenya at the ICJ, seeking to redraw the maritime boundary from the current eastward flow from the land border south of Kiunga to a diagonal flow.

According to Kenya however,the case should never have been filed because the alternative means for resolving the issue were not sort.

READ ALSO: MPs Should Refund the 5M Illegal Pay accorded to them by Government according to Edward Ouko

The motion moved jointly by Majority Leader Aden Duale and minority leader John Mbadi is proposing that Kenya should explore other lawful and constitutional mechanisms for protecting the republic of Kenya including deploying the Kenya Defence Forces (K.D.F) to protect the sovereignty and territorial integrity of Kenya.

Before deploying K.D.F to the area, the motion suggests that all other diplomatic measures be sought first through diplomacy and dispute resolution mechanisms available under African Union (AU), Intergovernmental Authority on Development (I.g.a.d) and East African Community (E.A.C).

They also want I.G.A.D. and E.A.C to be the first to resolve such disputes and not the International Court of Justice (ICJ)

The hearing of the case between Kenya and Somalia is set to begin on September 9 at the International Court of Justice (ICJ).

If the court agrees with Somalia, Kenya stands to lose up to 100,000km2 of sea thought to contain large amounts of hydrocarbons.

As the row continues,Kenya has accused Somalia of continuing to market oil stocks to investors even though the area is still contested and using illegal maps to encroach on Kenyan land, something that Somalia has denied.

The motion set before parliament will be debated after Parliament resumes from its monthly recess.