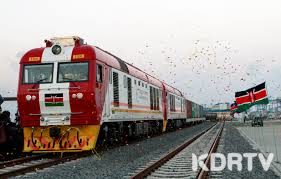 Following the high demand from Kenyans in purchasing the Madaraka Express tickets, Kenya Railways on Thursday announced the addition of five coaches from August 19 – 22, for the Nairobi to Mombasa morning train and the Mombasa to Nairobi afternoon train.

Kenya Railways intends to increase  the number of monthly commuters from the current 300,000 passengers to more than two million in the next two years.

The Ruiru-CBD route is served by 20 coaches at the rate of Sh50 per passenger which remains constant despite weather conditions.

In February the Kenya Railway announced it will purchase 11 DMUs this year at a cost of Sh1.15 billion.

This month alone Kenya railways made announcements on the progress of Phase two of the standard gauge railway stations in Ongata Rongai, Ngong and Maai Mahiu stations.