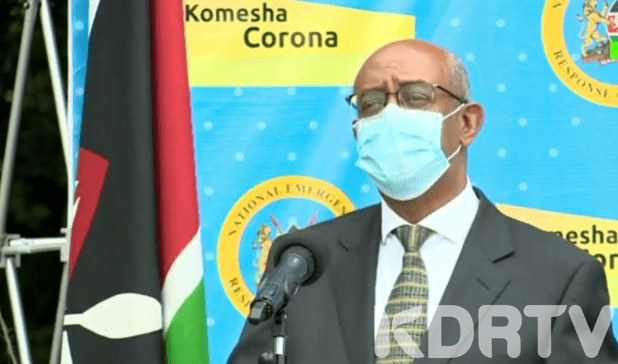 (KDRTV)-Kenya has confirmed 14 new positive cases of coronavirus raising the total number of people who have contracted the virus to 621 from 607.

According to Health Ministry through the Health Chief Administrative Secretary (CAS) Rashid Aman, the 14 new patients were confirmed after 922 samples were tested in the last 24 hours

The 14 new COVID-19 patients were drawn from Mombasa, Nairobi and Machakos counties which had three, one and 10 patients respectively.

In Nairobi, the patients were spread as follows; Kasarani-4, Makadara-2 and South C, Dogarreti South each recorded one case

Out of the new patients, 13 were randomly picked by the Ministry of Health`s surveillance team while one case was reported from a quarantine unit

So far, the Kenya`s Ministry of Health has tested 29, 430 with 202 recoveries since the first case was confirmed in March 13

However, many Kenyans have raised complains that the ongoing heavy down pour is limiting the efforts by citizens especially the displaced group to maintain social distance

“The country is experiencing heavy rains. Displaced people have been forced to congregate in makeshift camps. This is compounding the COVID-19 response. We are working with county governments on educating people on measures to mitigate COVID-19,” he noted.

The same citizen also expressed his worries about people who are currently sneaking in and out restricted areas by the government.

KDRTV has also received reports that though the government is doing everything possible to protect the front health officers from contracting the virus, a total of 34 health workers have contracted the deadly virus.

Read also: My husband abandoned me after surgery