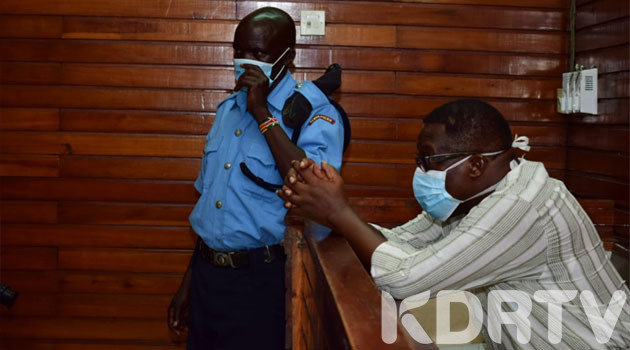 (KDRTV) – Rogue Kilifi Deputy Governor Gideon Saburi can breathe a sigh of relief after being released on a Ksh 200,000 cash bail.

While ordering his release on Thursday morning, Principal Magistrate Elvis Michieka ordered Saburi to deposit his passport with the court.

Saburi, who is facing charges of wilfully exposing himself in public while suffering from an infectious disease, has been in custody for more than 10 days.

The politician, who tested positive for COVID-19 is accused of defying a government directive to self-quarantine after jetting into the country from Germany last month.

Read Also: Kilifi Deputy Governor’s Event in Germany had Been Cancelled Over COVID-19

Consequently, he exposed hundreds of people to the dreaded virus with his reckless behaviour.

However, one of the bail conditions is that he self-quarantines for 14 days.

“The accused is required to self-quarantine for 14 days at his house beginning today, failure to which the court will be at liberty to cancel his bail,” Judge Michieka said.

Now, how does the court expect someone who defied the first directive to self-quarantine to do so at this time? This is a person who is in court for disregarding the same directive the court is asking him to do. Isn’t this irony?

Shouldn’t he have stayed in custody for the 14 days before being released on bail?

Last week, President Uhuru Kenyatta said that he hoped Saburi was handed a 10-year sentence for disobeying the law.

We just hope that Saburi has learnt his lessons and he won’t do anything stupid this time.

Subscribe to watch latests videos
In this article:COVID-19 in Kenya, Gideon Saburi, Headlines