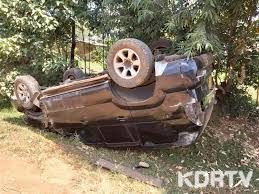 On Saturday Kimilili MP Didmus Barasa was involved in a road accident at Ndengelwa in Bungoma County that left his Toyota Prado vehicle extensively damaged after rolling of the road.

Mr. Baraza did not succumb to any serious injuries but two bicycle riders were injured and were rushed to the Bungoma Referral Hospital by onlookers.

Barasa said offered to cater for the medical expenses of the two riders.

According to Bungoma County Commander Francis Sang,  “police have launched probe into the cause of the accident and urged motorists plying the northern corridor  to be vigilant on the route to avoid accidents even as students head back home for August holidays.”