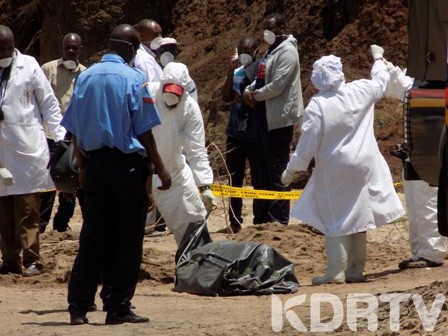 Detectives in Machakos are pursuing a priest linked to the brutal murder of Father Michael Maingi Kyengo, whose mutilated body was found in a seasonal river in Embu County on Wednesday.

Father Kyengo, who went missing on October 8, was found buried in a shallow grave at Mashamba Makimba Area in Embu. Police say he was strangled and his throat slit. The body, which was wrapped in a polythene paper and put in a sack, also sustained deep cuts.

The body is so mutilated that detectives will need to conduct a DNA test for positive identification.

Police have arrested Michale Mutunga who is being treated as the chief suspect in the murder. The 25-year-old was found with the deceased’s car, mobile phones and other documents. He is the one who led detectives to the body.

According to a source in the investigating team, this is a crime that could shake the Catholic Church to the roots of its existence.

“This could turn out to be a murder that could shock the church to its core as it may implicate one of their own in the killing,” the source said.

The case was cracked open after Mutunga agreed to collaborate with police disclosing that he had taken part in the murder plot. He showed text exchange between himself and another priest who is believed to have plotted the whole murder.

The police now believe that the two priests could have differed over a woman and money. A total of Ksh 1 million shillings was withdrawn from Kyengo’s account in four days.

Father Kyengo was an assistant Parish Priest at Thatha Parish. Father Josphat Kyambuu who is in charge of Thatha Parish described his colleague as hardworking.

“Father Kyengo was a hardworking priest who knew his job and we worked together in spreading the gospel in Thatha Parish,’’ he told a local daily.