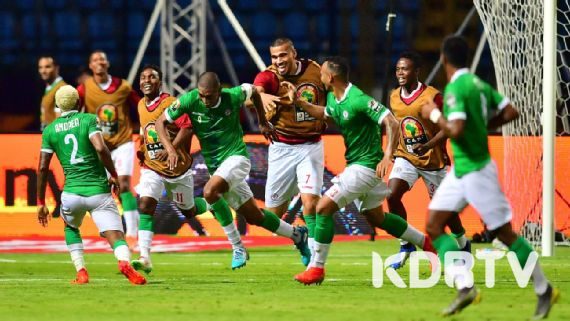 After Madagascar made their debut on Africa Cup of Nation (AFCON) in 2019, they have proved their potential after defeating DR Congo 4-2 on penalties after 2-2 draw, and secure a chance in the quarterfinals stage.

Madagascar made a good beginning by securing their first goal in the 9th minutes through Ibrahim Amada`s brilliant 20-yard strike.

Cedric Bakambu of DRC neutralized in the 21st minute as the two sides went on halftime with a draw of 1-1.

The Indian Ocean islanders secured their seemingly lead goal in the 77th minutes. Things went on well as they tried to defend the lead, unfortunately, Chancel Mbemba equalized in the 90th minute forcing both sides to take the extra time.

The extra time did not benefit either side and thus they sought a penalty shoot.

Madagascar scored all the penalty shoots while DRC missed two penalties paving ways for Madagascar to the next level of AFCON 2019.

Everton`s Congolese winger, Yannick Bolasie penalty attempt went over the bar confirming the possibility of Madagascar facing Tunisia or Ghana in the Quarterfinals in Cairo.