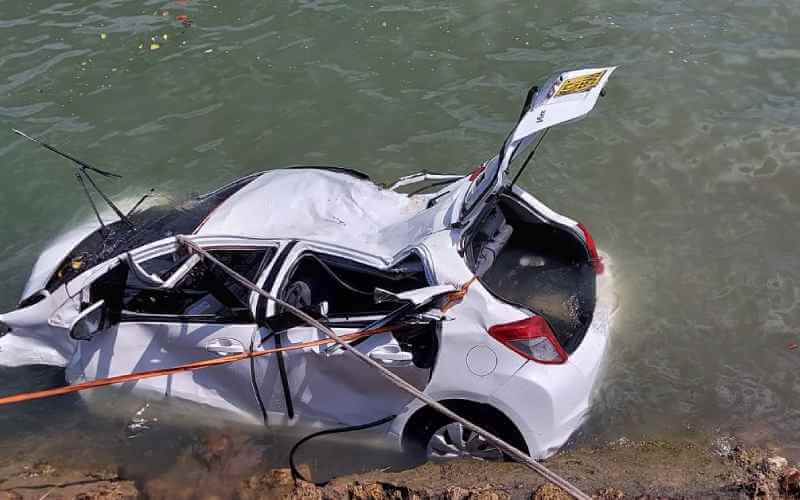 Car pulled out of the Indian ocean

(KDRTV) – A woman who plunged her vehicle into the Indian Ocean at the Makupa causeway on Wednesday morning has passed on.

Winnie  Achieng was pulled out of the wreckage of her Toyota Vitz vehicle after the accident but was pronounced dead at the Coast General Hospital. Her 12-year-old son Gift Otieno survived the accident.

#KENYA: Woman dies after car plunges into Indian Ocean in Mombasa.Rescuers retrieve a car from the ocean after it plunged into the Makupa Causeway on Dec.23, 2020. Police said Achieng, driver of the ill-fated car, hit a pavement while heading towards Mombasa Island from Changamwe pic.twitter.com/ekE68UiBNQ

According to witnesses, the boy swam to safety but his mum could not get out of the vehicle as she had fastened her seatbelt.

“I was in my boat when I saw the car plunge into the ocean. It took me some time to get to the car but I saw a boy swim to safety,” an eyewitness said.

Police say the 33-year-old was speeding her vehicle from Changamwe to Mombasa Island. She was allegedly using the outer lane and hit a pavement when she tried to overtake a motorbike. She plunged into the ocean.

“When I got here there was a boy who told us that his mother was trapped inside the car that had plunged into the ocean. We immediately jumped into the water but we found the woman unconscious. We managed to pull her out of the car but we could not tell whether she was dead or alive,” another witness said.

The accident happens just one year after another woman and her child plunged into the Likoni Channel. Mariam Kagheni and her four-year-old daughter Amanda Mutheu died when their vehicle slid off the ferry and plunged into the ocean.