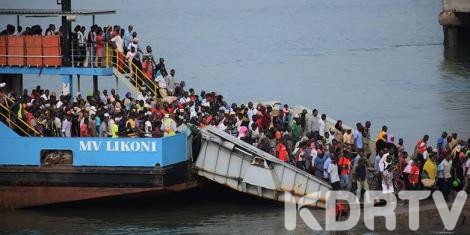 A very scary video showing a Kenyatta University Bus narrowly escape from plunging into the Likoni Channel has gone viral on social media.

The incident happened on Monday as the bus attempted to cross the channel on a ferry. According to eyewitnesses, the driver of the vehicle and his passengers had not disembarked, despite an order by the Kenya Ferry Services (KFS) forbidding passengers from remaining in their vehicles when on the ferry.

Weeks after Kenyans witnessed a mother and her daughter plunge into the Ocean at Likoni Crossing Channel, a Bus is seen struggling to avoid the same fate. pic.twitter.com/ArgeE3NQOU

The incident happened as the bus exited the ferry, it struggled on the ramp and almost reversed back to the ocean but the driver managed to avoid a disaster.

ANOTHER FERRY accident? A near tragic incident after Kenyatta University bus slid off the ramp #ConsumerVoice pic.twitter.com/8t0mMlzYGR

This comes barely a month after Mariam Kighenda and her 4-year old daughter Amanda Mutheu drowned after their vehicle plunged at the channel.

It took more than two weeks for a multi-agency team to recover the wreckage of the vehicle.

President Uhuru Kenyatta then fired members of the KFS board, as one of the measures to secure Kenyans using the busy channel.

The Senate has called for the grounding of five ferries which are very old and in dilapidated conditions. The vessels are deemed to be unseaworthy and risk to Kenyans.