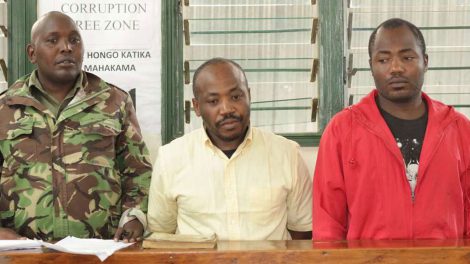 The High Court in Siaya has sentenced Joel Ogolla Luta to 35 years in prison for the murder of journalist Eric Oloo.

Oloo was killed in the house of former Ugunja deputy OCS Sabina Kerubo in 2019 in unclear circumstances. Kerubo, who was the in the case of Oloo, died in Nairobi early this year.

On Wednesday 21, Lady justice Roseline Aburili made the sentence stating that it should have been death but had to be switched to 35 years in prison because of the circumstances surrounding the case.

Luta at first had denied the charges but later on accepted and even asked for forgiveness from Oloo’s family. The judge said the accused was guilty of murder contrary to section 203 of the penal code.

The court also found out that Luta was not a first-time offender and had been taken to Ukwala law courts for causing disturbance. According to his probation officer, Luta was also a habitual offender.

“No one is entitled to eliminate once life and just say sorry after causing such a loss to the deceased’s family,” Aburili said.

She also said she had planned to charge Kerubo but she died.

The judge gave the accused 14 days to appeal.